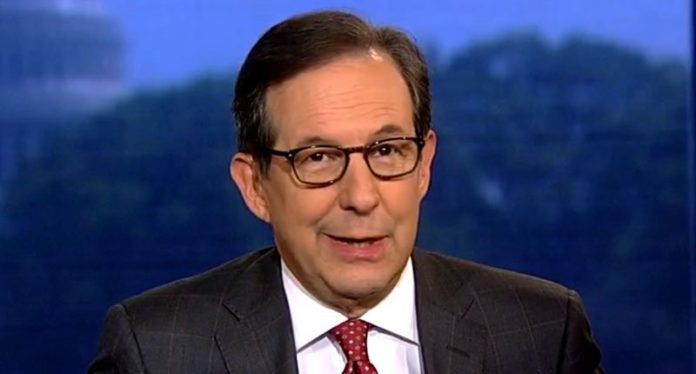 Just hours after getting attacked by his colleagues on the opinion side of Fox News, network anchor Chris Wallace openly fired back at them on Wednesday afternoon for ignoring facts in favor of pushing a political agenda to protect President Donald Trump.

Wallace is one of the few hard news guys left at the conservative network, and as such, he deals in facts.

Earlier in the day, Wallace analyzed the letter Special Counsel Robert Mueller wrote to Attorney General Bill Barr in which he expressed concern that Barr’s summary of the Mueller report did not include enough “context” and “substance,” and confused the American people on just how damaging the report is to Trump, reporting that the letter is damning against Barr because it reveals how untruthful he has been.

In response, Fox News host Laura Ingraham called into the network to complain about Wallace and his analysis of the letter.

“The idea that Bill Barr set about to fundamentally distort and misrepresent a 448-page report that he knew would be almost in its entirety released except for redactions that were agreed upon; the idea he would set about to do that to what, ruin his entire career and be roundly ridiculed, is preposterous,” Ingraham claimed.

“I know Chris Wallace at the top of your hour was indicating that I guess that he kind of agrees with these other cable networks that this was an attempt by the DOJ to spin what the conversation was between Barr and Mueller,” she continued. “So I don’t know if Chris Wallace has information that I don’t have, but that he is saying that Barr is perpetuating a lie about this conversation between him and Mueller.”

Wallace was clearly using the Mueller letter itself to back up his analysis while Ingraham clearly had a political agenda, even going so far as to declare that “this is not spin by the way,” in an effort to cover her own bullsh*t.

After all, she is one of Trump’s top sycophants on the network.

But Wallace refused to back down, and he not only doubled down on his analysis, but he also lectured Fox opinion hosts for openly ignoring and scoffing at facts just because they don’t align with their agenda.

“I know there are some people who don’t think this March 27 letter is a big deal,” Wallace said. “And some opinion people, some opinion people who appear on this network, who may be pushing a political agenda. But, you know, we have to deal in facts. And the fact is that this letter from the special counsel … was a clear indication that the [special counsel] was upset, very upset, with the letter that had been sent out by the attorney general, and wanted it changed, or wanted it at least added to.”

“There are a lot of people having read now the full report, or as much as it has been not redacted, agree that he didn’t reveal what was fully in the report,” Wallace concluded. “Again, those aren’t opinions. That’s not a political agenda. Those are the facts.”

Hours after Laura Ingraham blasted him on air for saying the Mueller letter is a big deal, Chris Wallace returns fire while describing her as someone “pushing a political agenda”:

“Again, those aren’t opinions. That’s not a political agenda. Those are the facts.” pic.twitter.com/1lLLsattWX

Unfortunately, Wallace will likely not receive back up from Fox News executives who have frequently sacrificed facts and evidence in favor of wild speculation, outright lies, and ignorance.

At this point, Wallace and other Fox News anchors would be better off leaving the network for one that appreciates facts, such as CNN or MSNBC. Because someday soon, Fox’s reliance on opinion hosts will backfire on them spectacularly as more advertisers flee and their viewership shrinks due to the fact that their audience is much older.

Facts will win in the end, and it will be Chris Wallace who has the last laugh.