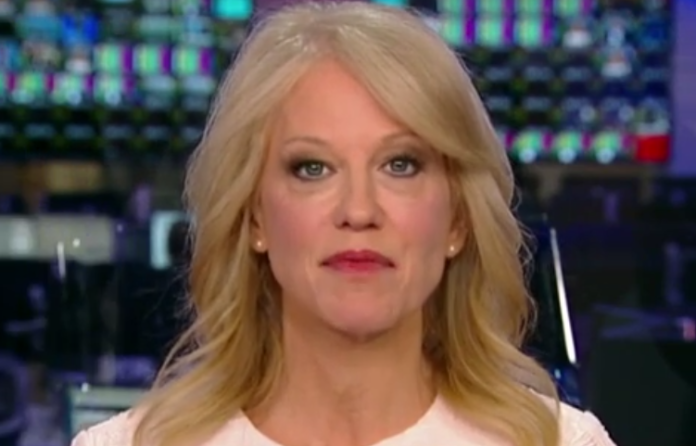 The one thing that Attorney General William Barr made clear in his summary of the Mueller report is that President Donald Trump has not been exonerated, but Kellyanne Conway refused to acknowledge that truth on Sunday as Fox News anchor Chris Wallace grilled her about it.

Trump and his supporters have repeatedly claimed over the last week that Mueller “totally exonerated” him.

But Barr clearly stated that the report “does not exonerate” Trump for obstruction of justice.

During an interview on Fox News Sunday, Wallace demanded Conway explain why Trump is lying about the report.

“The special counsel cleared the president on collusion, absolutely no question about it,” Wallace began, even though that doesn’t mean Mueller found no evidence of collusion. “But he especially did not clear him on the question of obstruction, so why is the president telling Americans something that is not true?”

Conway argued that Trump did not obstruct justice because he didn’t fire Special Counsel Robert Mueller, but Wallace refused to let her sidestep the question.

“Now Kellyanne, wait, but I’m asking you specifically about obstruction, and I don’t mean to interrupt, but I do want to keep you on point,” he said.

Conway insisted that there’s nothing about obstruction in Mueller’s report, resulting in Wallace literally reading out Barr’s summary verbatim.

And even then, Conway veered off topic to brag about the 2016 campaign, including denying that the campaign had any contacts with Russians, which is just not true.

“Well the president is probably comparing that report, and the ultimate conclusions of no conspiracy, no collusion, no contact with any Russian at a campaign that I managed into its final successful phases, and have always been offended that anyone would think that we would cheat, lie, steal or talk to any Russians, that’s ridiculous and always was,” she whined. “We’ll see what the full Mueller report says, but there’s nowhere in the Barr report that said the president obstructed justice, there’s nowhere in the Barr memo that says you or I obstructed justice.”

“Well there is no Barr report, Barr is simply summarizing Mueller, and Mueller says that it did not exonerate him,” Wallace once again pointed out.

And that’s assuming Barr releases the report at all. He could also release a heavily redacted version that hides all of the relevant information needed to conclude what evidence Mueller found. Clearly, the report must be damaging if Trump and his cronies are so desperate to hide it from the public. At this point, we can’t even trust Barr that the report clears Trump of collusion until we are all able to see it for ourselves. Until then, the administration is engaged in a cover-up and we should all demand to know why.