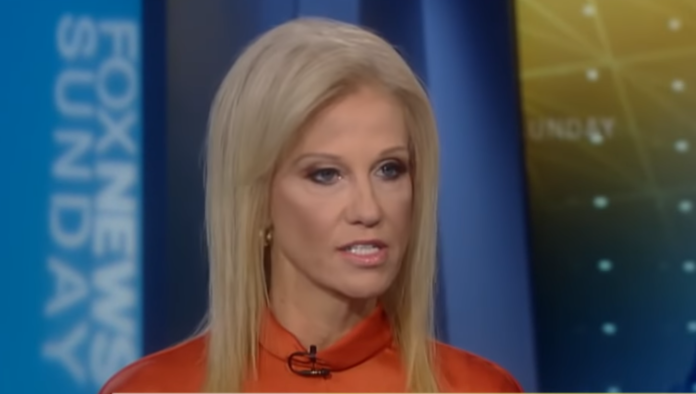 Conway was a guest on “Fox News Sunday,” and Wallace immediately reminded her that many of those being detained are held for 40 days or longer, even though U.S. immigration law limits being held to 72 hours:

“This was the pool report, ‘Almost 400 men wearing cage defenses with no cots, the stench was horrendous, some of the men were sleeping on concrete, they began shouting and wanted to tell us they had been in there 40 days or longer.”

“I understand that President Trump is trying to stop the flood of people across the border which contribute to the overcrowding, but how does it help for the president to minimize the situation and say it’s much better than what they had, or for Vice President Pence, in Kevin Corke’s piece, to say they’re all being well treated, when your own… I mean, you can look at the conditions there, it’s a disaster!”

As you’d expect, Conway got defensive and tried to shift blame to others, including former President Obama:

“That facility was meant to be a 72-hour holding facility. It’s not equipped to keep single males who have broken the law by coming here and were apprehended.”

And then she tried to change the subject, whining about the upcoming testimony from Special Counsel Robert Mueller before two House committees:

“Nobody’s ever apologized to us. Sure, oversight has a function but I think the American people are watching the way that taxpayer dollars [are being spent by] a bunch of comb-overs wanting do-overs we don’t need.”

Comb-overs? Has she looked at the rat’s nest atop Donald Trump’s head recently?

Wallace, clearly disgusted and annoyed, ended the interview by noting:

“Just another morning with Kellyanne Conway.”

And just another day of lies, dissembling, temper tantrums, and insults from the most immature White House in the history of this country. They should change the name of the place to Romper Room and be done with it.