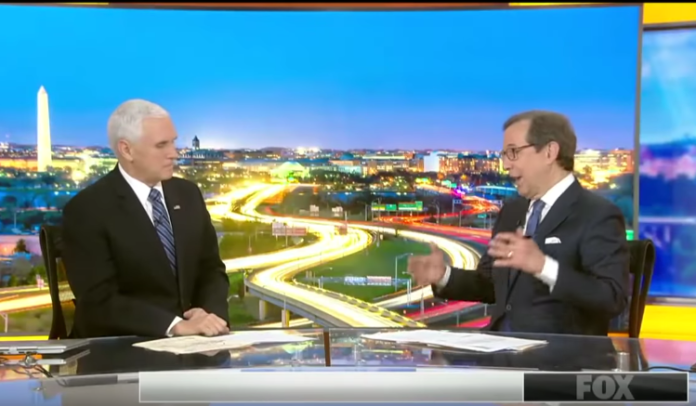 Vice-President Mike Pence tried to blame Democrats for the government shutdown on Fox News Sunday, and Chris Wallace was having none of it.

The shutdown has now dragged on for a whole month with no end in sight a day after President Donald Trump dangled a nothing-burger “compromise” in front of the Democrats during a speech on Saturday in an effort to pretend that he’s being reasonable. Democrats saw right through Trump’s scheme and rejected it, which Wallace pointed out.

“[A]s you well know, House Democrats rejected the president’s plan before he even offered it,” he told Pence. “Speaker Pelosi called it a, quote, nonstarter. And I want to point out their specific objection. They say that it doesn’t reopen the government first, which they insist on. They say that it doesn’t provide permanent protection for the Dreamers and the TPS refugees, it’s only three years. And they say that the full funding of the president is still demanding, $5.7 billion for the wall is a waste of money.”

Indeed, while Trump would get billions to build a permanent wall on the southern border, Democrats would only get temporary relief for DACA and refugees, which could be revoked in three years, especially if Trump wins re-election, thus kicking the can down the road when Trump could hold these migrants hostage again to get more wall funding.

Democrats also believe that a government shutdown should not be used as a negotiation tactic, which is why they want it re-opened first before debate begins on border security.

Pence claimed that the American people are on Trump’s side.

“The American people want action on our southern border,” he said. “They want border security, 800,000 federal workers want us to find a way to open the government.”

But Wallace interrupted with reality.

Trump could easily re-open the government by signing bills passed by the House and then negotiate for his wall later without a government shutdown gumming up the works. It’s hurting the nation every day, and Trump is being blamed more and more for it.

In fact, Americans not only blame Trump for the shutdown, but most also oppose his wall and actually support the Democratic plan offered by Pelosi and Schumer, which includes border security funding for technology and more personnel.

But Trump’s plan also enraged his own supporters, who accused him of offering “amnesty” to migrants, which Pence denied.

“This is not amnesty, there’s no pathway to citizenship,” he told Wallace. “There’s no permanent status here at all, which is what amnesty contemplates. What this is, is a good faith effort to address the issue, bring relief to DACA recipients.”

Again, if Trump gets a permanent border wall, Democrats should get permanent citizenship for DACA recipients and refugees covered by temporary protection status. It’s only fair. But Trump refuses because he just wants to be the only real winner in the fight. Democrats rightfully fear that Trump will just pull the rug out from under them in three years by killing DACA and TPS. While his wall gets built, Democrats would end up getting nothing in return. This is an empty promise by Trump and Democrats were wise to reject it.

Pence, meanwhile, got his ass handed to him by Wallace. Because the fact is that Trump could end the shutdown immediately by agreeing to sign the funding bills already passed by the House, the same bills Senate Republicans passed overwhelmingly in December before Trump refused to sign them.

This shutdown is still all on Trump and his only way out is to end it without wall funding and then start border security negotiations over in good faith.