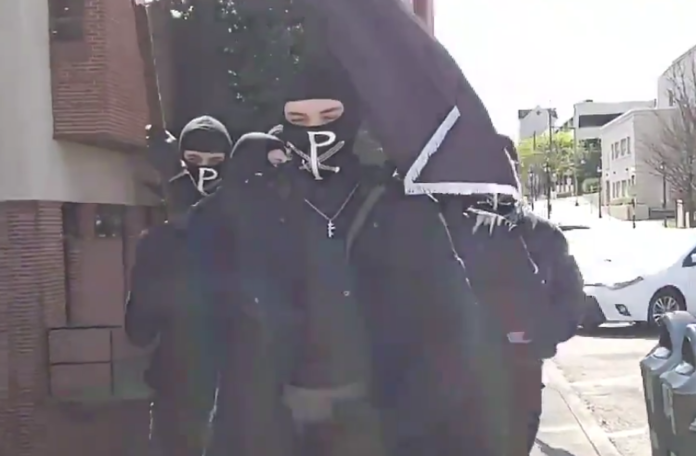 A so-called Christian militia group dressed like ISIS in order to scare people on the Internet. It didn’t go very well for them.

The group calls themselves the Legion of St. Ambrose and they even have a manifesto condemning homosexuality and demanding that women be relegated to the home and subjugated by men.

We reject: homosexuality, pedophilia, transgenderism, and any other unnatural sexual orientations/acts; we seek To see such practices banned within The nation. We demand a return to a patriarchal society, where The home and nation is upheld by traditional sex roles. We seek an end To no-fault divorces; broken homes will be avoided at all costs. The nation should provide: free marriage counseling, comprehensive spiritual and community support, and communal accountability. We seek an end to pornography, strip clubs, swinger groups, sex shops, prostitution, etc. We believe that one of the primary reasons for marriage is The procreation of children. Any attempt to artificially limit the number of children born is a sin against God’s Law.

The group also demands teaching “Christian values” in all schools and wants anti-Christian rhetoric to be banned among many other things.

To make their point with fear, they dressed like members of ISIS and posed on Twitter while threatening those they consider “enemies of Christ.”

If these guys were looking for the best way to get mocked, they found it. Because instead of people being scared, they treated them like fascist clowns desperate for attention.

I mean, the ski masks are pretty cool. Can we at least give the dweebs a chance?

do you pray in the siege masks ?

You’re not cops, or even holy men. You’re a bunch of 8chan/Gab nerds that are now using religion as a thin veil through which to spread your hateful, racist, cringey incel message. It’s the same ham-fisted dorky shit as usual, now with even more self-righteous Antifa LARP lmfaooo

He beat up the _moneychangers_ in the temple, not the Jews. Your masks are slipping.

You guys should wear black codpieces with bright red snakes embroidered on them. You’d look a lot scarier.

Legion? Doesn’t appear to be enough of them for a squad.

Maybe not a military squad but they show promise as a glam squad.

Just buy a squirt gun and play in the neighbors yard. No one will judge you. (Actually we all will like we are now)

*points and laughs at you in Pagan

If conservatives want to know why more people are abandoning organized religion, stunts like this with largely anti-American manifestos are the reason why, especially when your “militia” dresses like ISIS.

The only reaction groups like this deserve are for people to point at them and laugh.