The United States Blues
Home News Chuck Schumer lays DJT out with one line after he tries to... 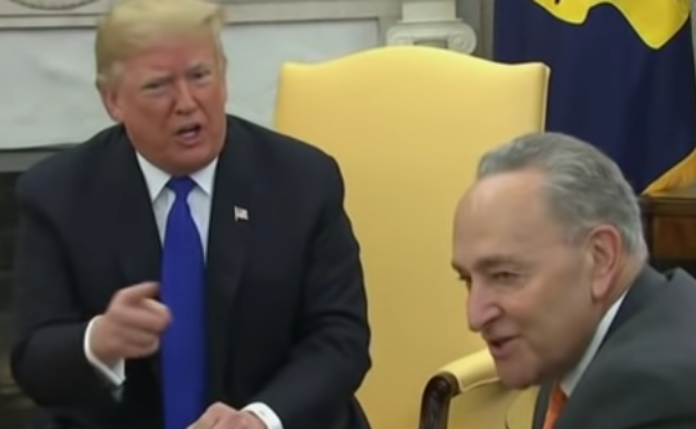 President Donald Trump undermined his own call for unity in his upcoming State of the Union address on Tuesday by preemptively whining about Senate Minority Leader Chuck Schumer (D-N.Y.) criticizing it. He also attacked the media for not crediting him for Republicans holding the Senate.

In a speech on the Senate floor, Schumer took aim at Trump’s SOTU by pointing out the real state of the union, which includes worse healthcare under Trump and a worse economy for the middle class while the rich get richer. Schumer also dinged Trump for inviting a child with the same surname to the address in order to somehow prove that people unfairly attack him.

President Trump will report tonight on the state of our union.

But, the state of the Trump economy is failing America’s middle class.

The state of the Trump healthcare system is failing American families.

The state of the Trump Administration is chaos. https://t.co/TFZmaoD2Jw

Apparently, Trump saw or at least heard about the speech, and despite reports that Trump plans to talk about unity and compromise, he launched an attack on Schumer.

I see Schumer is already criticizing my State of the Union speech, even though he hasn’t seen it yet. He’s just upset that he didn’t win the Senate, after spending a fortune, like he thought he would. Too bad we weren’t given more credit for the Senate win by the media!

Of course, Republicans already had control of the Senate and merely held onto it in November in what was considered to be a bad year for Democratic Senate candidates because they had to defend more seats than Republicans did, and in tougher states to boot. Democrats, however, won back the House in a landslide.

Schumer noticed Trump’s Twitter tantrum and pointed out his hypocrisy.

Thanks for watching my speech but you must have missed this line:

“Even more empty than his policy promises are President Trump’s calls each year for unity”#SOTU https://t.co/dtKUKBnNlK

And Senate win? Republicans already had the Senate, and nearly all the seats up for re-election were Democrats who had to defend their seats.

You want a participation trophy or something?

Democrats weren’t expected to win the Senate because many more Democratic seats were up for grabs than Republican seats. They blew you out in the House though!

Here is a Friendly Reminder of who Runs the Chamber Trump will be Speaking in..pic.twitter.com/k1exdgxy0u

Don‘t forget: Trump’s mouth is moving, but Putin’s words are coming out.

United States President Donald John Trump, ladies and gentleman, all the proof you need that all the laundered Russian mob money in the world can’t buy dignity.

or a decent wig

I saw it. Here is the transcript…

You are pathetic, juvenile, immature and dumb. Way to focus on unity today you fraudulent pig.

For ppl to believe this shit, feed into this shit and spread this shit, they have to be as pathetic and dumb as you are.

Fuck you and the SOTU. It’s time to STFU.

You didn’t win the senate. You barely held on to it. And you lost the house by an historic margin.

Is this your idea of COMITY? Of COMPROMISE? Didn’t think so…

Schumer was not even trying to bait Trump and he lashed out anyway, thus destroying any notion Trump has about unity and compromise in his speech. Trump’s attack on Schumer and the media speaks louder than anything he will say tonight and now the nation knows he will be merely faking it.