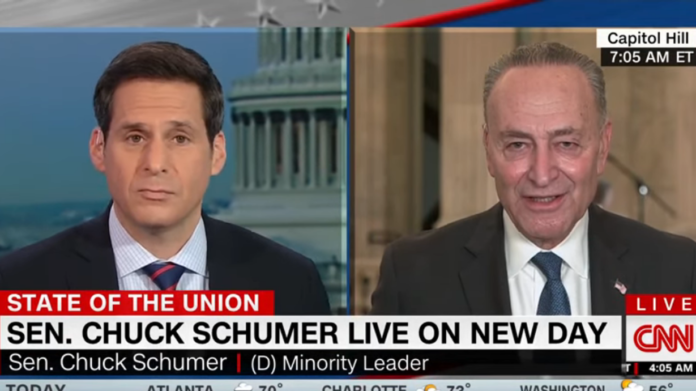 During his State of the Union address Tuesday night, President Donald Trump all but demanded that the investigations being conducted into his 2016 campaign and suspected collusion with Russsia end immediately:

“If there is going to peace and legislation, there cannot be war and investigation. It just doesn’t work that way!”

“You know what I think it shows, John? He’s scared — he’s got something to hide! Because if he had nothing to hide, he’d just shrug his shoulders and let these investigations go forward.”

Exactly! Only a guilty person acts the way Trump has acted since the Russia probe began. An innocent man would welcome the investigation and offer to cooperate fully so the truth could be revealed.

Schumer was also asked about Trump’s comments at a pre-SOTU luncheon in which he called Schumer a “nasty son of a bitch.” The minority leader said such remarks prove that while Trump may mouth the word “unity,” he doesn’t mean it:

Trump kicked off his feud with Schumer on Wednesday morning, a few hours before he delivered the State of the Union:

I see Schumer is already criticizing my State of the Union speech, even though he hasn’t seen it yet. He’s just upset that he didn’t win the Senate, after spending a fortune, like he thought he would. Too bad we weren’t given more credit for the Senate win by the media!

Trump may pretend he’s seeking compromise and reconciliation, but as the old saying goes, actions speak louder than words.