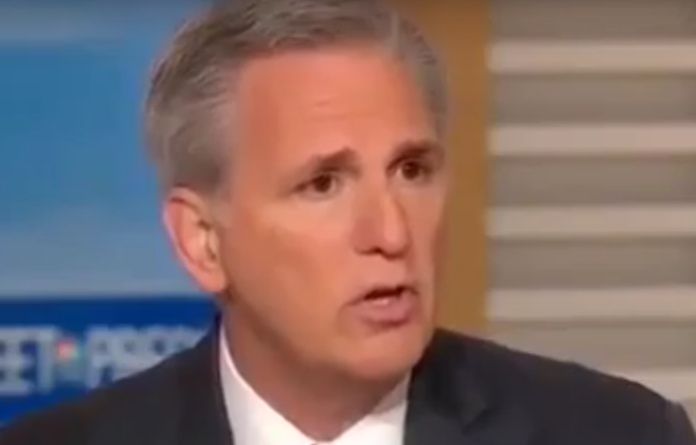 House Minority Leader Kevin McCarthy (R-Calif.) got busted in a lie by Chuck Todd after claiming that President Donald Trump didn’t cause the government shutdown.

Trump caved on Friday and agreed to end the 35-day government shutdown saga by signing a bill to re-open the government for the next three weeks so that Republicans and Democrats can debate his border wall and come to some sort of compromise. House Speaker Nancy Pelosi (D-Calif.) refused to give in to Trump’s demands for $5.7 billion of wall funding because Trump was using the shutdown as a negotiation tactic, something he is already trying to do again by threatening another shutdown in February if he doesn’t get his way. Trump even threatened to declare a national emergency over a crisis that is non-existent.

On Sunday during an appearance on Meet The Press, McCarthy repeatedly blamed Democrats for the shutdown and profusely kissed Trump’s ass by portraying him as an innocent victim of the shutdown who only cares about the welfare of the American people.

“I watched the president, in every one of these meetings, offer a reasonable solution,” McCarthy claimed. “I watched then-Leader Pelosi spend a new historical time on the floor of the House, eight hours, talking about DACA. We don’t have the DACA solution solved, when we could’ve. We still have a problem at the border. We don’t have that solved. And now, we’ve got three more weeks to go. I watched Speaker Pelosi sit there and would not negotiate with anything. So I give President Trump a lot of credit. He put the American people before politics.”

Trump offered a fake “compromise” that would have given him a permanent wall in exchange for temporary protections for DACA recipients and refugees that he could kill should he get re-elected in 2020. That means Democrats would ultimately get nothing out of it. That’s not a compromise at all.

Trump also repeatedly tried to bully Pelosi and Senate Minority Leader Chuck Schumer (D-N.Y.) and lied to the American people over and over again about how effective a wall would be on the border even though experts have already debunked his claims.

In addition, Trump also threw a tantrum before one meeting even began and stormed out of the room.

He acted like a petulant child, but McCarthy called him “reasonable” before blaming Schumer for not helping Republicans get 60 votes to pass Trump’s wall money.

“The president is the only one who has been reasonable in these negotiations,” McCarthy said. “He did not shut down the government. Let’s be very clear. We were in the House, in the majority. We moved a bill to the Senate. You know, as well as everybody else in America, it takes 60 votes. Schumer is the one who said, ‘No.'”

In point of fact, the Senate had already voted on a continuing resolution to fund the government through early February after Trump had signaled he would sign it. He then rejected it after it passed by an overwhelming margin and forced House Republicans to add his wall to the bill and send it back to the Senate. Only the Senate had already adjourned for the holiday break because they thought Trump would keep his word. Even Republicans left town, but McCarthy whined about Democratic leaders going on vacation.

Todd reminded the GOP leader that Trump himself took complete ownership of the shutdown before it even happened in December.

“He’s the one that said he’d be proud to own it,” Todd said. “Who else did it? He rejected the Senate bill to keep the government open.”

Indeed, here’s the video of Trump proudly taking the blame for the shutdown via YouTube, a video that will haunt Republicans in perpetuity.

Todd then slapped McCarthy with his own words from 2017 before Trump took office.

“And I put together the team, actually, with the speaker and others, our staff, working on legislation now, so when we’re sworn in, not waiting till when the president is sworn in, but at the very first week of January, we are able to move the legislation needed to start building the wall,” McCarthy said.

But it never really happened. Congress, controlled by Republicans, only approved additional border fencing and funds to repair existing fences. They had two years to approve the full funding for Trump’s wall and did not do it. Only after Democrats took over the House did Trump start frantically crying about a supposed “crisis” at the border.

“At the end of the day, why should Democrats bail out your party that had two years to figure out a way forward here?” Todd said.

And he’s right. Democrats did not start the shutdown and they are not obligated to give Trump money for a wall that even Republicans once opposed.

An overwhelming majority of Americans oppose Trump’s wall and blame him for the shutdown. And they will blame him again because he threatened another shutdown in three weeks if he doesn’t get his way. McCarthy is only digging the hole deeper for Republicans by trying to revise history in Trump’s favor. The American people aren’t buying it and Republicans should be ashamed of themselves for not admitting the truth.