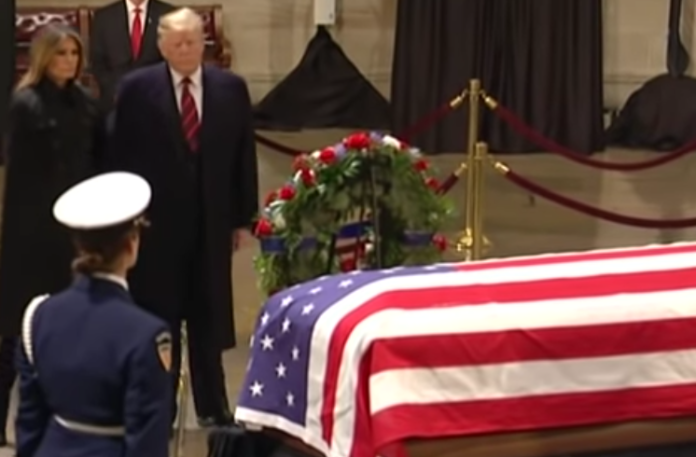 The family of former President George H. W. Bush may want to seriously reconsider inviting President Donald Trump to their patriarch’s funeral because he seems to be enjoying it rather than being sad and respectful about it.

Trump even dared to salute Bush’s casket during a ceremony in the Capitol Rotunda despite being a draft dodger during the Vietnam War, an insult to Bush, who served courageously during World War II.

And now Trump’s “looks forward” to attending the funeral at the National Cathedral and meeting with Bush’s grieving family. He also bragged about the White House Christmas decor and the ceremonies honoring Bush thus far.

Looking forward to being with the Bush Family to pay my respects to President George H.W. Bush.

Looking forward to being with the wonderful Bush family at Blair House today. The former First Lady will be coming over to the White House this morning to be given a tour of the Christmas decorations by Melania. The elegance & precision of the last two days have been remarkable!

Seriously, Trump’s remarks are inappropriate for the situation as usual, which is why it’s a good thing that he won’t be delivering a eulogy, probably because it would be all about himself and contain personal attacks that belong nowhere near a funeral.

Twitter users ripped Trump to shreds for being heartless.

Elegance and precision? It’s a memorial service not a crossover commercial what the actual fuck is wrong with you.

Hasn’t the Bush family been through enough? Now you’re going to force Laura to look at the blood trees?

Also, my deepest condolences to the Bush family in their time of mourning.

They are burying their father, not popping in for a visit. It isn’t about you (again)

I’m certain the wonderful Bush family would rather pour hot tar into their eyeballs during this time of mourning than spend any time with your racist, repugnant self. The Christmas decor is a dystopian nightmare. Just like you and your creepy crime fam. You are demented. Resign.

… on a day of Bush’s family mourning why is the President bragging about the White House Christmas decorations? Unbelievable…

This is why you don’t get invited to stuff.

Only you could mangle this. You don’t “look forward” to seeing a grieving family. And just because everything has gone according to plan, doesn’t mean you get to take credit for it. Also it’s not elegant or precise to call the last two days remarkable.

The elegance and precision of grief? Trump has left the building. Dude, stop talking.

Repeat after me “we do not look forward to meeting with a bereaved family”. We solemnly and quietly pay our respects without drawing attention to ourselves.

Your lack of emotional intelligence never ceases to amaze. Someone died.. it’s not a time to “look forward” to a meeting or tout how wonderful everything is going. You need an editor, Mr. Prez. Someone with a heart.

George H. W. Bush, just like our nation, deserves a president who is capable of empathy and respect. Trump is capable of neither and the only reason why he was invited to the funeral is that Bush did not want to break with tradition, although Trump will be the first sitting president in many years to not deliver a eulogy at the funeral of a past president. And it’s pretty damn clear why that’s the case.