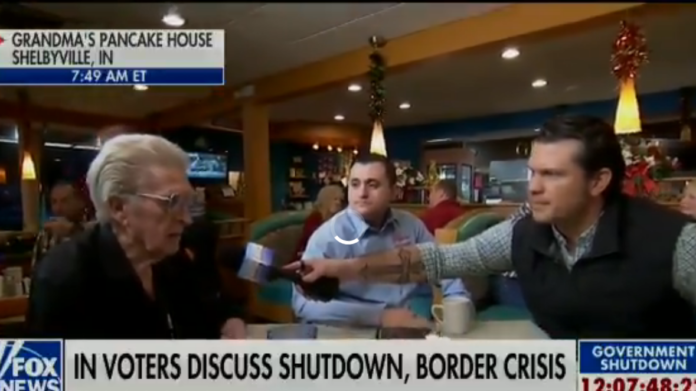 Much like their political hero, supporters of President Donald Trump aren’t exactly the sharpest knives in the drawer, and their knowledge of how government works is rudimentary at best.

Such was the case Thursday morning on “Fox & Friends.” Co-host Pete Hegseth was doing a live remote from  Grandma’s Pancake House in Shelbyville, Indiana. Hegseth asked diners about the incoming Democratic majority, including Speaker of the House Nancy Pelosi. He asked a man identified as Phil:

“Phil, your take as President Trump stares down a new speaker, Nancy Pelosi.”

A clearly confused Phil replied that he thought things would soon go like an episode of Trump’s old show, “The Apprentice.”:

“I’m expecting to wake up some morning and find (on) Fox News, Trump on there pointing his finger, (saying), ‘You’re fired, Democrats.'”

What does that even mean?! Hegseth could only laugh and respond:

“Maybe that needs to happen, right?”

But Phil was either too confused or camera-shy to say anything else, which led Hegseth to quip:

“They say humans learn to speak 3 years of age, put a microphone in front of them, they clam up.”

After assuring Phil that he’d done fine, the Fox host then gave him and viewers a rudimentary lesson in political science, commenting:

“He can’t fire the Democrats, but he can stare them down, and that is the big question here — will the president stand firm in a showdown?”

The segment ended with Hegseth remarking:

“Here in this corner of Indiana, they would rather see the president stand strong and get money for the wall.”

But as some people noted on Twitter, Fox News specializes in creating viewers who don’t have a clue when to comes to any number of subjects:

Huh? Who knew the president couldn’t fire the democrats. Thank goodness for the knowledge Fox News gives their audiences. #DumbAsARock

That’s @foxnews for you. Lowering the bar on stupid. @PeteHegseth

You mean to tell me that a Trump supporter doesn’t understand how the government works? What are the odds of that happening…

Fox News sent @PeteHegseth to a diner in Indiana to get great political insights like this pic.twitter.com/42icUwG5rs