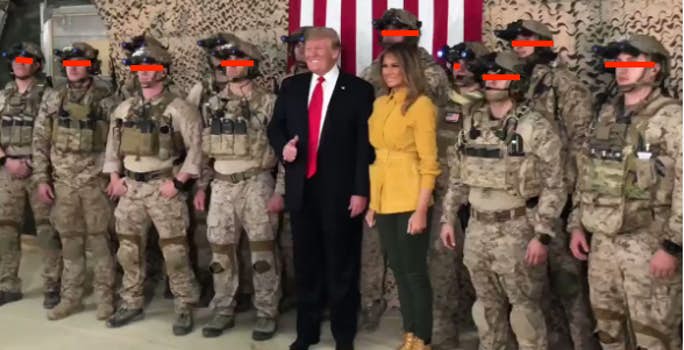 Though it took him two years to do so, President Donald Trump spent three hours with U.S. military troops serving in Iraq on Wednesday. But, as usual, he managed to make it all about himself.

After bragging to the military personnel about how great of a job he was doing as commander-in-chief, Trump got back on Air Force One and flew back to the United States, sending out a video on Twitter of him visiting with a Navy SEAL team he met while in Iraq:

.@FLOTUS Melania and I were honored to visit our incredible troops at Al Asad Air Base in Iraq. GOD BLESS THE U.S.A.! pic.twitter.com/rDlhITDvm1

But he neglected to hide their identities, which is essential since special forces troops such as SEALs are operating in secret, performing covert actions. As Newsweek reports:

“Malcolm Nance, a former U.S. Navy intelligence specialist with experience in Iraq told Newsweek on Wednesday that posting the video was a break from traditional procedures that are usually strictly enforced and designed to safeguard the identities of U.S. special operation forces, especially when deployed to a combat zone.

“‘Operational security is the most important aspect of personnel deployments. The real names, faces, and identities, of personnel involved in special operations or activities, are usually a closely held secret in a combat zone,’ Nance said. ‘Revealing them casually, through an unusual media exposure even if it’s the commander in chief, would prove a propaganda boom if any of this personnel are detained by a hostile government or captured by a terrorist group. There would be no denying who you are and what you do.'”

An official with the Department of Defense confirmed that Trump had screwed up:

“Even during special operation demonstrations for congressional delegations or for the president or vice president, personnel either have their faces covered or their face is digitally blurred prior to a release to the general public.

“I don’t recall another time where special operation forces had to pose with their faces visible while serving in a war zone.”

As usual, Donald Trump never lets anything get in the way of him and a good photo op. Because it’s all about him. The rest of us are just bit players in the demented reality show this has-been thinks he’s the star of.