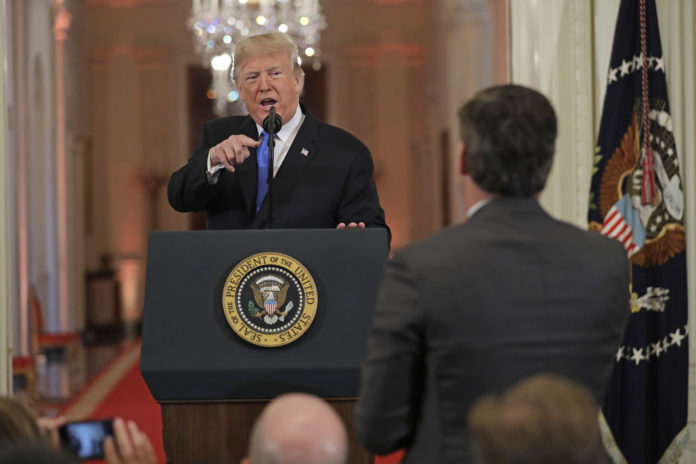 CNN has decided to give President Donald Trump and his administration a little lesson in the First and Fifth Amendments, and their actions are almost guaranteed to enrage an already unstable president who has been lashing out at others since he returned from his trip to Europe.

Before he left for France, Trump got into an angry confrontation with CNN White House correspondent Jim Acosta, accusing him of being a “terrible person” for daring to ask about a caravan of Central American immigrants.

CNN has struck back, suing the president for pulling Acosta’s press pass:

“Both CNN and Acosta are plaintiffs in the lawsuit. There are six defendants: Trump, chief of staff John Kelly, press secretary Sarah Sanders, deputy chief of staff for communications Bill Shine, the director of the Secret Service, and the Secret Service officer who took Acosta’s hard pass away last Wednesday. The officer is identified as John Doe in the suit, pending his identification.”

After filing the suit in U.S. District Court in Washington, D.C, the network issued a statement which read:

“CNN filed a lawsuit against the Trump Administration this morning in DC District Court. It demands the return of the White House credentials of CNN’s Chief White House correspondent, Jim Acosta. The wrongful revocation of these credentials violates CNN and Acosta’s First Amendment rights of freedom of the press, and their Fifth Amendment rights to due process. We have asked this court for an immediate restraining order requiring the pass be returned to Jim, and will seek permanent relief as part of this process.”

There is a legal precedent for the CNN lawsuit, according to First Amendment attorney Floyd Abrams: A 1977 ruling in favor of Robert Sherrill, a muckraking journalist, who was barred from the White House in 1966.

Abrams also noted that there are specific guidelines that have to be followed before a reporter’s access can be revoked: