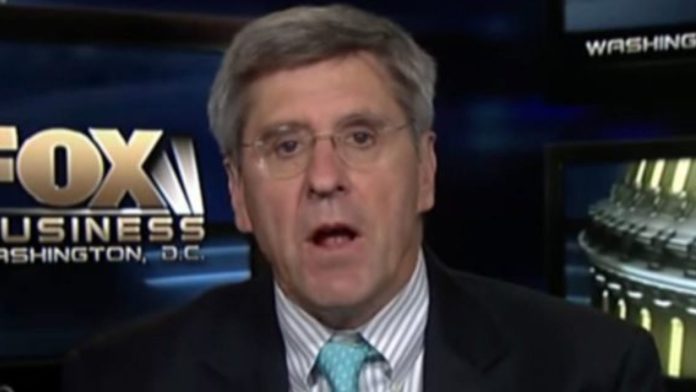 President Donald Trump nominated Moore to the Federal Reserve Board earlier this year in an effort to politicize and take over monetary policy because Trump isn’t getting his way.

Washington Post business columnist Catherine Rampbell has already skewered Moore for supporting a return to the gold standard and for making outrageous claims about the economy.

But during an appearance on CNN, Moore denied that he ever supported the gold standard.

“I don’t really think I’ve said anything much about the gold – I’m not in favor of a gold standard,” Moore said.

In response, Burnett played several video clips of Moore professing his support for the gold standard, including in 2016 in which he directly stated: “I like the idea of going to a gold standard” after Trump had already been elected.

The damning videos humiliated Moore and revealed him to be a liar. And so, he sought to clean up his mess.

“Let me respond to that,” he began. “I think a gold standard would certainly be better than what we have right now. But I think there’s a much better system that we could put in place that would not just look at gold but all commodities.”

In other words, Moore still supports the gold standard and going back to a more unpredictable and volatile financial system.

“I think a gold standard would be overly restrictive,” Moore said.

Stephen Moore: “I don’t really think I’ve said anything much about the gold – I’m not in favor of a gold standard.”

According to Money and Banking, “the evidence shows that both inflation and economic growth were quite volatile under the gold standard.”

Under a gold standard, inflation, growth and the financial system are all less stable. There are more recessions, larger swings in consumer prices and more banking crises. When things go wrong in one part of the world, the distress will be transmitted more quickly and completely to others. In short, re-creating a gold standard would be a colossal mistake.

Clearly, Moore is not the person Americans should want on the Federal Reserve Board. He will advocate for going back to a failed economic system that deepened the Great Depression and has caused multiple banking panics throughout our history. It is just not a sustainable system that our economy and the world economy can risk. And the fact that Moore was so willing to lie about his support of it makes it all the more clear that this is a bad idea.