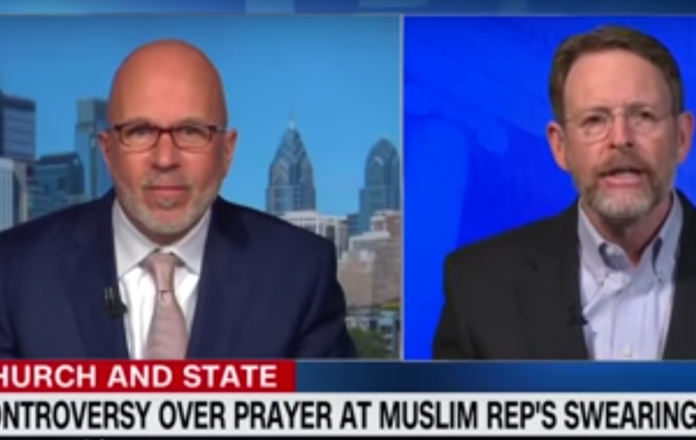 CNN host and Pennsylvania native Mike Smerconish questioned why Republicans insist upon opening legislative sessions with prayer if they are just going to use it as a weapon instead of as a positive message of unity and tolerance.

Earlier this week, Pennsylvania GOP state Rep. Stephanie Borowicz opened a session with a prayer that seemed innocent enough at first until everyone realized that what she was actually doing is attacking Muslims during a day which just so happened to feature the swearing-in of the state’s first Muslim lawmaker in the statehouse.

During the prayer, Borowicz mentioned Jesus over a dozen times and praised President Donald Trump for standing with Israel, which includes the Israelis’ persecution of Palestinians and discrimination against the Arab population.

She also specifically referenced a Bible verse often used to condemn other faiths.

“Every knee will bow and every tongue will confess, Jesus, that you are Lord,” she said.

But Muslims do not believe Jesus is “Lord.” In Islam, he is a prophet. he is a source of wisdom and admired, but is not considered the son of God.

Movita Johnson-Harrell, the Muslim lawmaker being sworn in that day, tried to be respectful by bowing her head in silence. But once Borowicz began to speak, she realized the prayer was designed to be intolerant of Muslims and a protest against her very existence.

“That was protest. That was not an invocation. That was not a prayer,” Johnson Harrell told PEOPLE. “It was a protest to the first Muslim woman coming to the House of Representatives.”

Both Democrats and Republicans have since apologized to Johnson-Harrell as conservatives insist that the prayer was not intolerant at all.

Perkins began by claiming that critics of the prayer are trying to “silence” Christian lawmakers from exercising their freedom of religion and accused Muslims in this country of reverse intolerance.

Smerconish responded by saying that prayer that purposely offends those of other faiths is discriminatory and should be curtailed.

“I’m not asking for it to be hidden,” Smerconish said. “I’m not asking it to be totally reigned in. I’m saying 13 times is too many. Let me ask this question: there were 500 comments appended to the Washington Post coverage of this discussion and I read many of them. Many folks’ takeaway is to say this is why there shouldn’t be any kind of prayer that begins a public session. We really should have a separation of church and state — respond to that.”

Indeed, no opening prayers would certainly solve the problem of religious fanaticism in the halls of government. It certainly would stop lawmakers from using their religious beliefs as a weapon.

“Look we are a people of faith,” Perkins insisted. “You go back to the very beginning, our Congress opens with prayer every day since Benjamin Franklin suggested it happen so that there could be a coming together. Look we are a country of faith, a Judeo Christian faith in this country and it again gives freedom to others to have religious freedom. We are the only country that has the tolerance as we do. I think that’s what should be celebrated, not the fact that someone is offended.”

Of course, America was not founded as a Christian nation. Franklin did, indeed, propose opening prayers but his motion was not voted on during the 1787 constitutional convention. Furthermore, the architect of the Constitution himself James Madison opposed opening prayers and appointing chaplains precisely because it violates the separation of church and state and results in discrimination against other religions.

So, Perkins’ whole argument is invalid and only serves as a defense of religious intolerance and discrimination all while using the Bible as a shield. If an Imam had repeated the name of Allah or Muhammad over a dozen times and asked for forgiveness on a day when an evangelical was being sworn in as if a sin were being committed while using the Koran to condemn other religions, Perkins would be singing a much different tune.