The United States Blues
Home News CNN Host Destroys Matt Gaetz And His Attack On Democrats With One... 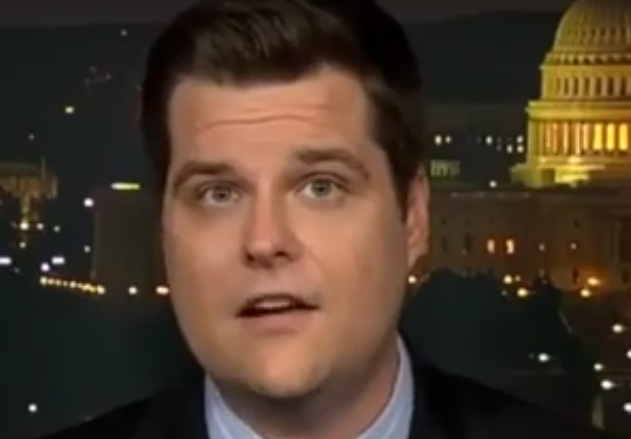 When Rep. Matt Gaetz (R-Fla.) appeared on CNN Saturday night to smear Democrats, he wasn’t prepared for host Ana Cabrera to drop a bomb on him about Democrats and border security.

Known as one of President Donald Trump’s most loyal sycophants, Gaetz appeared on CNN to attack Democrats and accuse them of being weak on border security in an effort to defend Trump’s demand for $5 billion in wall funding that has resulted in a government shutdown.

Trump rejected a unanimously passed Senate bill that would have funded the government through early February, and ordered House Republicans to pass their own version of the bill with his wall money.

Despite taking ownership of the shutdown on video inside a televised Oval Office meeting last week, Trump has been blaming Democrats for it and his Republican allies are doing the same.

“A recent poll of border security agents showed that 95% of them agreed that more physical barriers would assist in the performance of their duties,” Gaetz claimed. “I think we can have an all of the above strategy. Buy Democrats keep voting against all things that we hope will keep the country safer like sanctuary city reform, like ending chain migration.”

She then dropped a huge inconvenient truth bomb on Gaetz by reminding him that Trump and House Republicans rejected a compromise bill offered by Democrats that would have given Trump $25 billion for his wall in exchange for reinstating DACA.

“I’ve been around here long enough to remember in February, when the Democrats came forward and said we will give you $25 billion for border security in exchange for a pathway to citizenship for DACA,” she said.

Cabrera picked up that little tidbit from Rep. Ryan Costello the previous night when he appeared on CNN to blast his Republican colleagues for not taking a much better deal when they had a chance.

In fact, Democrats were prepared to offer the same deal this past summer, which CNN reports “included Trump’s requested $25 billion for his border wall and required much more detention of undocumented immigrants — addressing what Trump calls “catch and release.” It also ends the diversity visa lottery and cuts family-based migration, what Trump refers to as “chain,” and diverts those visas into a merit-based system that DACA recipients could apply for.”

In other words, Trump could have gotten just about everything he has been demanding. All he and the Republicans had to do in return is reinstate DACA. But they rejected the offer and have now opted to shut the government down over $5 billion.

It should also be pointed out that a majority of Americans oppose the wall and even Border Patrol agents would rather have improved drone and sensor technology instead of a wall.