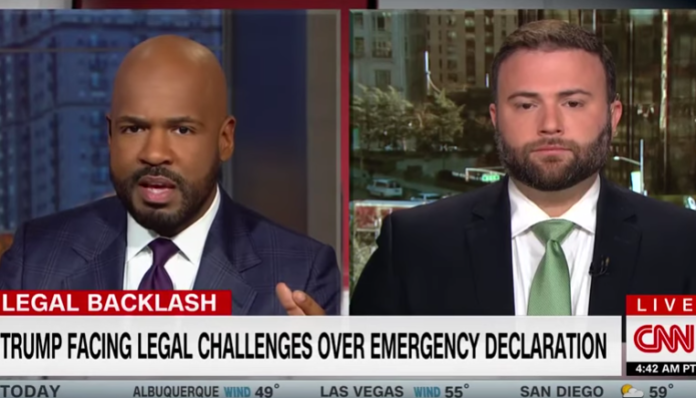 Every time President Donald Trump has claimed that his “big beautiful wall” is already being built, his supporters have bought it hook, line and sinker. On Saturday, CNN host Victor Blackwell destroyed one Trump supporter’s belief with reality.

First, Mexico would pay for the wall, then American taxpayers, and now Trump claims the wall is already being built on the southern border, complete without appropriations from Congress as required by law. He even repeated the claim while declaring a national emergency on Friday.

For some reason, Trump’s supporters, including New York City Republican councilman Joseph Borelli, believe him. But when he tried to repeat Trump’s claim on CNN, Blackwell put him in his place so hard that he got him to admit that he actually doesn’t know if Trump’s wall is being built.

“Let me come to another thing the president said yesterday and has been saying for a while now that there’s a lot of wall that’s being built,” Blackwell began. “The president is already saying there are additional miles of this new wall being built — that is not true. Why is the president saying it?”

Borelli replied by trying to get Blackwell to move on to a different topic, but the CNN host was having none of it.

Indeed, where is the new wall being built?

All Borelli could do is cite Trump as his source.

“I don’t know the specifics, but I mean, he’s been pretty clear that there’s wall under construction,” he claimed.

“Yes, he’s been very clear on a lot,” Blackwell responded. “There is not an inch of new wall that’s been built. There has been replacement of fencing, but there’s not been any new wall. Why do you support his lie that’s coming from the president?”

“I don’t know,” Borelli replied. “I’ve seen videos of wall being built, so I would not give into that speculation.”

“Yeah, I mean, I watch networks like CNN and other networks that have shown videos of walls being built. correct me if I’m wrong,” Borelli said.

And it turns out that Blackwell is correct. Footage shown on CNN was likely of existing wall being repaired or replaced, which is what Congress has already approved funding for, not new wall as Trump and Borelli claim. Furthermore, any additional miles of border barrier are to be fencing, not an actual wall that Trump demanded.

Despite Republican majorities in both houses of Congress, lawmakers have not approved such funding. In 2017, the president managed to secure about $1.6 billion for border protection projects, but they are primarily for fortifying existing border fencing, not expanding the current wall.

When confronted by the facts, Trump supporters like Borelli are forced to admit that they actually don’t know if Trump is telling them the truth. They apparently just take his word for it because they like what they are hearing. The problem is that Trump could say anything and they would believe him, which makes him and his supporters a threat to our country, which was founded on principles of reason and facts. Americans should always do their own independent research instead of taking a public official’s word for it, lest they get duped by a demagogue like Trump and look like a fool on CNN.