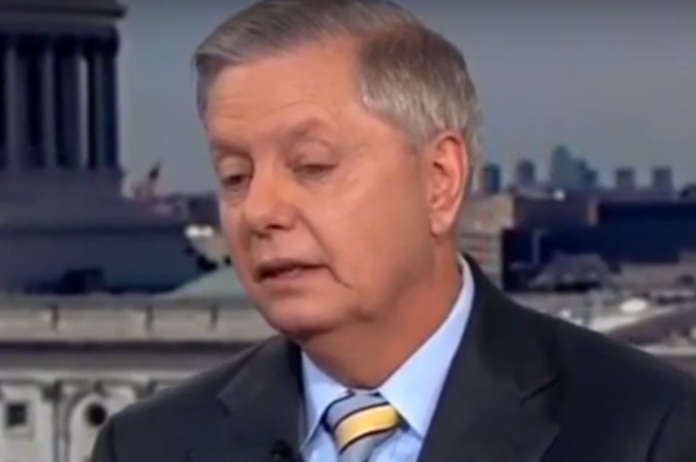 Senator Lindsey Graham (R-S.C.) still refuses to defend his friend the late-Senator John McCain against President Donald Trump’s attacks even though he’s the one who suggested McCain give the Steele dossier to the FBI in the first place.

On Wednesday, Graham spoke to CNN anchor Kate Bolduan about the Mueller report and the Senate Judiciary Committee’s intent to go on a witch hunt to blame others for the Russia investigation instead of Trump’s own behavior, which includes multiple contacts with Russians during the 2016 campaign and his kowtowing to Russian dictator Vladimir Putin.

Graham falsely accused Democrats of hiring British intelligence officer Christopher Steele to put together the dossier, except that it was a conservative publication that hired Fusion GPS long before Hillary Clinton’s campaign resumed funding for it after the publication abandoned it. Fusion GPS also hired Steele.

The dossier, some of which has been verified, has been the center of Republican ire since Trump took office, with Graham calling it “garbage.”

But when McCain had the dossier in his possession, Graham urged his friend to give it to the FBI.

“So if the dossier is garbage, if it is garbage, you’ve now said that you told John McCain when he received the dossier to give it to the FBI,” Bolduan said. “Do you regret making that suggestion?”

All of a sudden, Graham argued that some of the dossier could be true:

“Not at all,” Graham replied. “I said ‘listen, I don’t know if it could be a bunch of garbage, it could be true, it’s not our job to figure it out, hand it to the FBI.’ The FBI had the dossier months before, but we didn’t know, but what do we know now? We know now that the information with the dossier is unverified to this day.”

Again, some of the dossier actually has been verified.

Bolduan then knocked Graham because Trump has been slandering McCain for handing the dossier over.

“You surprised a lot of people, though, when you revealed that McCain talked to you about the dossier and that you told him to turn it over,” she said. “The president has over and over again spread misinformation at the very least, and lied about that and the dossier, and that McCain spread the dossier around and that is a stain against him.”

So, by all rights, Trump should be attacking Graham instead of McCain.

Rather than concede that Trump should be attacking him instead of his dead friend, Graham tried to pass the buck instead.

“The McCain Institute guy shopped it around all over town,” he claimed.

“That is not what Donald Trump was saying,” Bolduan pointed out. “You talked to Trump about it. Did you set him straight?”

“I know what happened,” Graham said. “I know that McCain acted responsibly, and the people around him didn’t.”

But that still does not excuse Trump’s attacks and Graham’s refusal to call Trump out for them. McCain is no longer alive to defend himself. But Graham is perfectly capable of standing up to Trump in defense of his friend. It’s just that he is now a Trump lackey and his friendship with McCain apparently no longer matters to him.

Graham ought to be ashamed of himself.