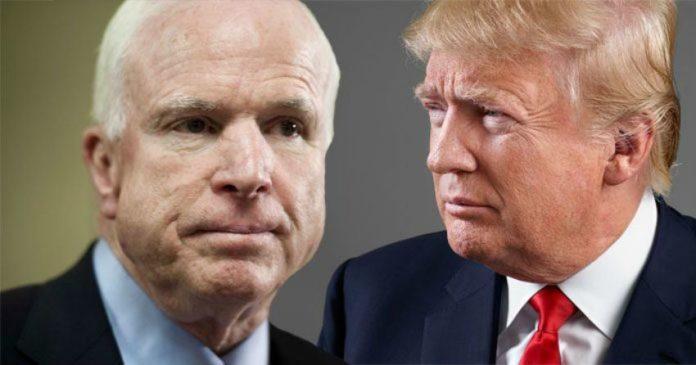 President Donald Trump spent part of his time Sunday attacking the late Arizona Senator John McCain, who served with honor in Vietnam and endured years of torture in the infamous “Hanoi Hilton” POW camp, but karma caught up with the president in the form of CNN host Ana Cabrera.

On “CNN Newsroom,” Sunday afternoon, Cabrera noted that Trump had taken cheap shots at McCain instead of denouncing the sort of white supremacy that led to the deaths of 50 Muslim worshipers in New Zealand:

“The president did use his direct line to the American people to take more cheap shots at an American war hero who is not even alive to defend himself. Trump again slamming the late senator John McCain today, he says, for trying to derail his run for the presidency in 2016.”

Cabrera then went on to add that McCain’s longtime friend and colleague, Senator Lindsey Graham (R-SC) called McCain “one of the most consequential senators” in U.S. history, and then added:

“Clearly not a position held by the president, who did, to his credit, did go to Vietnam, although not until he was in his 70s and with Secret Service protection.”

That’s exactly right. Instead of serving his country the way McCain did, Trump got out of service in Vietnam by having a family doctor say young Donald had “bone spurs” in one of his feet, although years later Trump couldn’t recall which foot had ailed him and played intramural sports in college despite the injury which kept him from military service.

Just the fact that Trump remains obsessed with a man who died of brain cancer last year after devoting his life to public service and being a man of principle tells us everything we need to know about this president: He is an old man with the intellect and emotional maturity of a child. He has no honor, no shame, and no morals. And he is a complete disgrace to everything this country stands for.