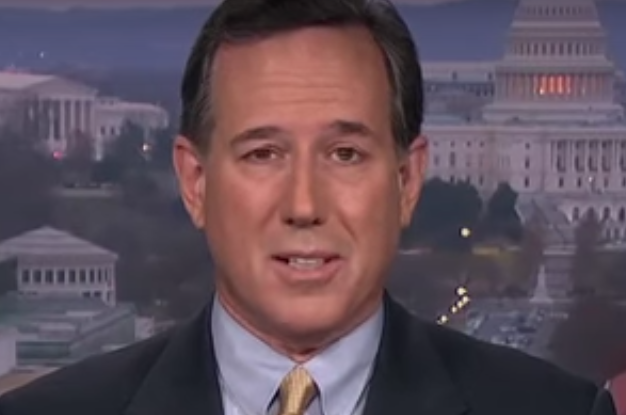 President Donald Trump is an unindicted co-conspirator who coordinated with a directed his former lawyer Michael Cohen to commit campaign finance felonies to help his 2016 campaign, but Rick Santorum thinks Trump should get a pass, which is why CNN host John Berman ripped him a new one.

The evidence and witnesses against Trump just keep piling up as National Enquirer (through parent company American Media Inc.) has now admitted to working with Trump to help cover up his affairs with two women so they would not talk during the campaign and ruin his election chances. Trump now only has his word against everyone else, as Rep. Adam Schiff observed on Wednesday night.

“Just because AMI did it, that doesn’t mean that’s the sole reason Donald Trump did it,” Santorum said after Berman recapped the events that unfolded yesterday. “What you gave is AMI’s reasoning, not Donald Trump’s reasoning.”

“That is so vastly different than paying $150,000 to silence somebody,” Berman replied.

Indeed, the violations by the Obama campaign were minor infractions compared to what Cohen and Trump did.

Speaking to Politico in 2013, Republican election lawyer Jason Torchinsky said that “$375,000 is a huge fine” but added that the Obama campaign was also the first billion-dollar presidential campaign in history, making the fine “proportionally … not out of line.” In the same story, former FEC commissioner Michael Toner said “that the infractions were relatively minor, given the scope of the campaign.”…The infractions committed by the 2008 Obama campaign were not alleged to be intentional, and the FEC did not consider the campaign’s documentation lapses as rising to the level of a “serious” offense prosecutable by the Department of Justice.”

And for Cohen’s campaign finance violations:

From a legal standpoint, the Department of Justice has already proved that Cohen intentionally acted to facilitate and hide an illegal contribution for the purpose of affecting the election, because that is what he formally admitted to…Obama’s civil FEC infractions, while they resulted in a large fine, are legally distinct from what Cohen pled guilty to, which is the intentional commission of felonies intended to affect the outcome of a federal election.

Trump and Santorum are seriously out of line by accusing Obama of committing criminal acts.

Santorum continued to desperately defend Trump throughout his appearance, arguing that the Justice Department can’t prosecute because the FEC hasn’t charged Cohen or Trump for committing crimes. Berman repeatedly shot down his claims, pointing out that the Justice Department doesn’t have to wait for the FEC to make any sort of ruling before prosecuting lawbreakers, especially those who openly admit to their crimes in a court of law as Coehn has done..

And Berman would go on to shame Santorum for constantly giving Trump a pass despite the evidence and witness testimony.

“Is there any violation, is there any payment that the president could have made here that would bother you, that you would think would put him in legal jeopardy?” he asked. “I am trying to figure out if this is just a blanket acquiescence to the president’s claims here, or whether or not there’s some standard to which you would hold him accountable?”

Santorum responded by crying about “criminalization of politics.”

Just for the record, Cohen admitted to violating two campaign finance laws, which you can find here and here. And prosecutors most certainly do not have to ask the FEC before prosecuting those who violate laws on the books.

Santorum is trying to excuse Trump’s crimes by using the FEC as a scapegoat. He should be ashamed himself and CNN should not tolerate such behavior.