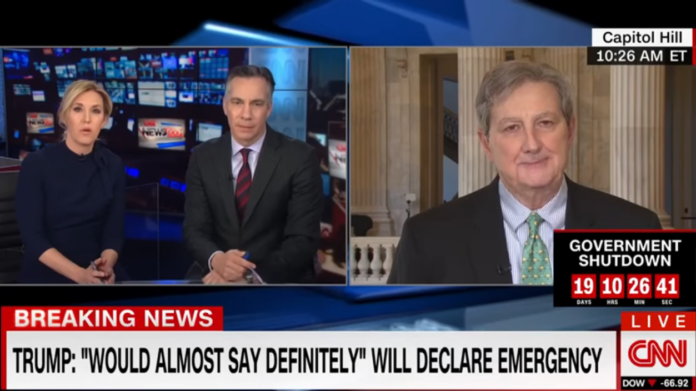 CNN host Poppy Harlow wasn’t about to let a Republican Senator continue making excuses for President Donald Trump’s repeated lies about the wall he wants to build on the Southern border, and she shut him down using facts and logic, two things Trump defenders absolutely despise.

Senator John Kennedy (R-LA) said Speaker of the House Nancy Pelosi (D-CA) should be blamed for the ongoing government shutdown, even though Trump is the one trying to extort $5 billion he promised Mexico would provide for the wall. That led Harlow to ask:

“You heard the president many times during the campaign say that Mexico would pay for the wall, right?

“So he just said this morning quote, ‘I never said this,’ that’s not true, he did. Do you think the president has misled the American people on who will actually pay for this?”

“No, I don’t. I don’t think that is relevant to the discussion.”

But Harlow wasn’t about to let Kennedy get away with such hypocrisy, telling him:

“Poppy, I understand your point, I just don’t agree with it. I don’t think it is relevant to this discussion. The only real relevant issue to this if you strip away the politics and personalities and dislike for each other is: can you seal a 1,900-mile border without using in part a wall or a physical barrier?

You also don’t have to blatantly lie and tell Americans that Mexico will pay for your wall. You don’t have to be so insecure and spineless that you let Rush Limbaugh and Fox News lead you around by the nose instead of acting like a leader. And yet that’s exactly what Donald Trump repeatedly does.

As for Senator Kennedy, he needs to learn that the only “real relevant issue” is whether or not he’s going to act like a gutless coward who jumps to attention whenever Trump snaps his fingers or like a statesman who makes sure federal employees get the money they’re owed so they can provide for their families.

We won’t hold our breath waiting for either Trump or Congressional Republicans to act like honorable, rational people.