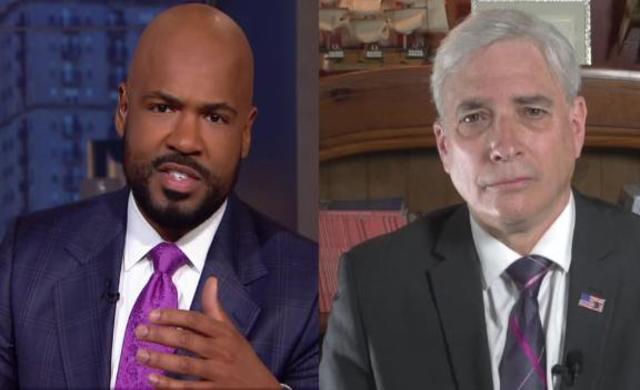 CNN host Victor Blackwell wasn’t about to let an adviser to the president’s 2020 campaign get away with suggesting that President Donald Trump has never encouraged or incited violence with his rhetoric, and he quickly fact-checked and then shut down the Trump acolyte for his lies.

The topic of the interview was a video Trump tweeted out Friday suggesting that Rep. Ihan Omar (D-MN) was disrespecting the memories of those who died on September 11, 2001, with remarks she made defending Muslims. Blackwell reminded Steve Rodgers of the president’s re-election team:

“Last week, a man was arrested for threatening to murder Congresswoman Omar and according to the affidavit, he said, and this is a quote, ‘He is a patriot, loves the president and hates radical Muslims.’ This is in reference to why he wanted to hurt, to kill representative Omar. Should the president consider that when tweeting videos on his Twitter account?”

“You know what? We certainly will never, ever endorse someone committing an act of violence against anyone. We say things and express our freedoms of speech. We are not responsible for the actions of other people. We could say something on air and a crackpot will turn it around and try to justify their actions.”

Blackwell was having none of his guest’s bogus excuses, reminding him:

“That is simply not true.

“If you see someone who wants to throw a tomato, punch him in the face or I’ll pay your legal bill if you attack a protester,” something like that?”

Once again, Rodgers attempted to deflect from the real issue at hand:

And that’s when Blackwell dropped the hammer on his guest, ending the interview by telling Rodgers:

Donald Trump has incited violence and hatred ever since he first announced his run for the White House, and he continues to do so as president. Saying otherwise is just a blatant lie, and that’s another thing his president does endlessly.