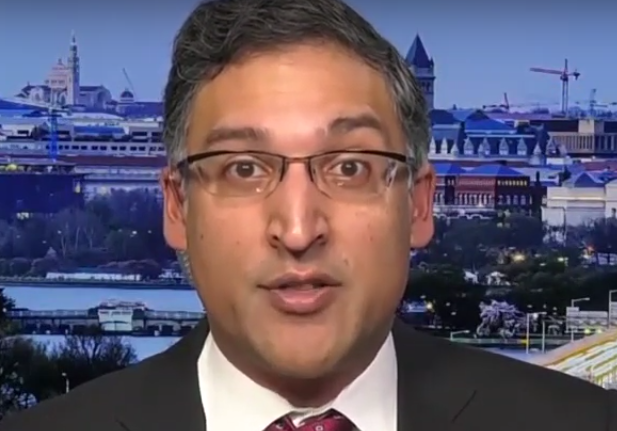 President Donald Trump faces prison time even if he is not indicted while being in office, says CNN legal expert and George Conway’s frequent writing partner Neal Katyal on Monday morning.

Earlier in the day, Trump frantically panicked over the Russia investigation and recent court filings by Special Counsel Robert Mueller identifying Trump as “Individual 1” who coordinated with and directed his lawyer Michael Cohen to commit campaign finance felonies that carry prison sentences.

And while the Justice Department claims that the president can’t be indicted, that doesn’t let Trump off the hook.

“Trump knows he’s facing some pretty strong criminal liability when he leaves office, one way or another,” Katyal said. “Even if a sitting president can’t be indicted, he’s got to know his future looks like it’s behind bars unless he cuts a deal with the prosecutors.”

Katyal then explained the seriousness of campaign finance felonies.

“This is not an ordinary campaign contribution,” he said. “These are potentially the most significant contributions in the history of the United States. These payoffs very well may have swung the entire election. That’s very different than payments made over a period of years… here, the timing really smells.”

Indeed, Trump literally directed Cohen to pay off Stormy Daniels to keep her quiet about an affair he had with her shortly after First Lady Melania Trump had given birth to his youngest son. Such a bombshell revelation could have turned many of his evangelical supporters against him at a crucial point in the 2016 Election.

Even Harvard law professor Laurence Tribe has pointed out the flaw in Trump new defense.

This tweet is itself a SMOKING GUN: Saying it was wrong to call his payments a “campaign contribution” implies he’s known all along that he wanted to make a campaign “expenditure” while hiding it from voters by funneling it off the books by contributing to a shell company https://t.co/yMkdBJoRDa

It should also be pointed out that two different special prosecutors have written memos declaring that a sitting president CAN be indicted.

A 1974 memo to Watergate Special Counsel Leon Jaworski said that even the president is not above the law and that prosecution is an option.

And Special Counsel Ken Starr also believed a sitting president could be indicted according to a memo obtained by The New York Times.

Written by constitutional scholar Ronald Rotunda in 1998, the memo clearly states that sitting presidents can be indicted and that no one is above the law, including then-President Bill Clinton.

“It is proper, constitutional, and legal for a federal grand jury to indict a sitting president for serious criminal acts that are not part of, and are contrary to, the president’s official duties … In this country, no one, even President Clinton, is above the law.”

So, Trump could be indicted during his presidency or after. Either way, he is screwed.