The United States Blues
Home News CNN Mocks Trump With Supercut Of Himself Bragging About Knowing More Than... 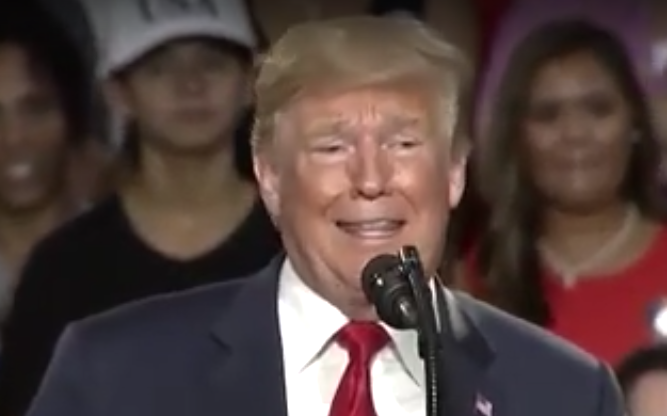 In a hilarious response to a claim President Donald Trump recently made in one of his frequent Twitter tantrums, CNN put together a supercut of Trump bragging about himself and how he knows more than everyone else about everything.

On Friday, Trump whined about not getting the border wall funding he has been demanding by claiming that he knows technology “better than anyone.”

The Democrats are trying to belittle the concept of a Wall, calling it old fashioned. The fact is there is nothing else’s that will work, and that has been true for thousands of years. It’s like the wheel, there is nothing better. I know tech better than anyone, & technology…..

Of course, Trump doesn’t really know anything. It’s just a boast to make himself look good, but all it really does is open himself to embarrassment and being mocked.

During the weekend edition of New Day on CNN Saturday, correspondent Jeanne Moos reminded viewers of all the times Trump has claimed to know more about something, even more than actual experts.

Then CNN ran the supercut.

“Nobody knows more about campaign finance than I do,” Trump bragged in an old clip that hasn’t aged well considering Trump recently got busted coordinating and directing the commission of campaign finance felonies.

“Nobody knows more about trade than me,” he once claimed, only to engage in a disastrous trade war with multiple nations that has cost thousands of jobs and billions of dollars here at home. Trump also slightly tweaked NAFTA and tried to fool us into thinking he replaced it with a new deal by rebranding it as the USMCA.

“Nobody knows more about construction than I do,” Trump said in May even though he’s probably never actually worked construction a single day in his life and wants to let construction companies use asbestos as a building material again.

“What field doesn’t he excel in?” Moos sarcastically asked as the supercut continued.

“I know more about ISIS than the generals do, believe me,” Trump said in his next egregious claim, which has just recently been proved wrong by Trump himself when he declared false victory over ISIS and pulled our troops out of the fight in Syria just as we were closing on a real win.

“Nobody knows more about environmental impact statements than me,” Trump proclaimed despite ignoring climate change reports from his own administration.

“There’s nobody that understands the horror of nuclear better than me,” he declared, but went on to reclassify nuclear waste as less harmful than it actually is in order to make it easier to dispose of unsafely. And don’t forget that Trump got duped by North Korea into thinking that they’ll denuclearize only to build their arsenal under his nose, and withdrew from a deal that prevents Iran from building nuclear weapons of their own.

“It’s enough to make your head explode,” Moos remarked, going on to point out that Trump even thinks he knows more about Senator Cory Booker (D-N.J.) than Booker knows about himself.

Moos even mocked Trump’s claim that he “knows the best words.”

“President Trump sure knows how to spew superlatives,” she said. “From a guy who doesn’t like to read.”

Indeed, who could forget “covfefe” and “boarder” and “councel.” And then there are the two times he used “smocking” instead of “smoking” in the same tweet. Hell, Trump even once referred to his wife as “Melanie.”

CNN then played a scene from “Annie Get Your Gun” featuring the lyrics “Anything You Can Do, I Can Do Better.”

Time and time again, Trump has claimed to be the best at just about everything, but all he has managed to do is prove that he’s better at failing than anyone else and that he’s the biggest moron, and nothing he says is ever going to change that.