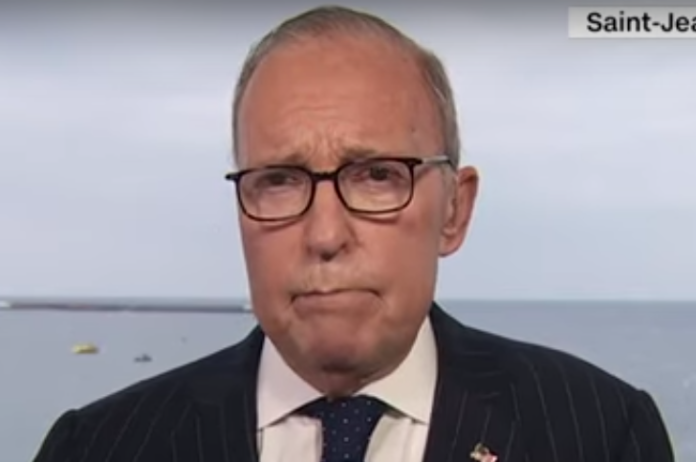 President Donald Trump’s economic adviser Larry Kudlow couldn’t stand getting called out over and over again for lying about how the the rest of the G7 nations feel about his trade war with China.

Trump is at the G7 this weekend where he is trying to convince world leaders that his trade wars are good for the global economy, even though his recent tantrum against China has shaken markets and makes a recession even more likely.

During the summit, even United Kingdom Prime Minister Boris Johnson is on video stating that his country does not like the tariffs being placed on China by Trump.

European Union leader Donald Tusk warned that the trade war would “lead to a recession,” and French President Emmanuel Macron says the tariffs are “bad for everyone.”

CNN had those direct quotes from these leaders, so host Brianna Keilar asked Kudlow to respond.

“How are you responding to criticism from world leaders about the strategy with China?” she asked.

But Kudlow refused to concede that G7 leaders disagree with Trump’s trade policies.

“I’m not sure I agree how you portrayed that,” he replied.

“What do you mean, that’s a quote,” Keilar pointed out.

Rather than acknowledge the facts, Kudlow channeled Trump and lied by claiming everyone at the G7 supports his trade war.

“Well, that may be a quote but sometimes you’re taking a quote out of context, let me try to generate some context,” he said. “Again, I was in that meeting for two hours with the world leaders. Indeed I participated in the meeting. First of all, all of those world leaders, every single one of the seven leaders, G-7 leaders…”

Keilar interrupted to remind Kudlow that these quotes are on tape.

“If I might just finish my thought, please,” Kudlow continued. “I was there. I heard every single one of those leaders agree that China has exercised continuous debilitating and destabilizing unfair trading practices, every single one of those leaders said that and they expressed support for President Trump, who is leading the way to try to get China to make changes.”

Keilar spent the next few minutes putting Kudlow in his place for daring to lie about how world leaders at the G7 feel about the trade war, resulting in a stammering Kudlow desperately defending his lies so that Trump can claim he has support even though he has none and his trade policies are just pushing the country and the world toward what could be a deep economic downturn.