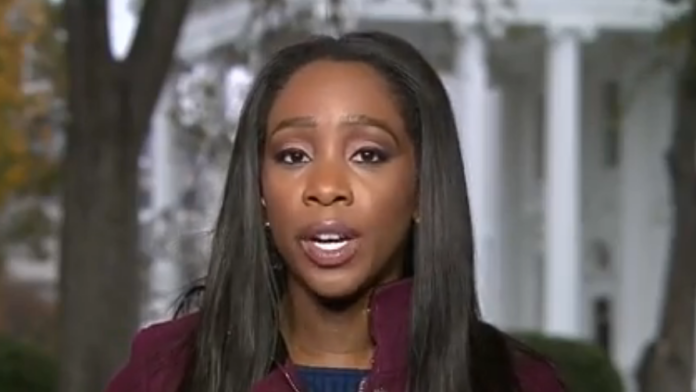 Before he left for a state visit to celebrate the 100-year anniversary of the World War I armistice in France, President Donald Trump made sure and attacked a CNN reporter for daring to ask a question about the Mueller investigation:

“Do you want [Acting Attorney General Matt Whitaker] to rein in Robert Mueller?”

A disdainful look on his face, Trump responded:

“But I watch you a lot. You ask a lot of stupid questions.”

President Trump: “What a stupid question that is.” pic.twitter.com/W0xR292vfC

Minutes after the exchange, Phillip was asked by CNN host Poppy Harlow about the tense moment with Trump. Phillip noted:

“I tried to ask him multiple questions during the gaggle. He ignored most of them. I did ask him one of what I think is the most pressing questions that a lot of people have about this Matt Whitaker appointment, which is ‘what’s the intention here, does the president want his new acting attorney general to rein in Robert Mueller?'”

Phillip then added that her query was completely legitimate (not to mention timely) since the president replaced Attorney General on Wednesday:

“I asked him, ‘do you want him to rein in Mueller’, he called it a stupid question. It’s the most important question here because there are a lot of really clear questions about whether Matt Whitaker ought to be doing that given what he said publicly in the past about Mueller.”

Trump got agitated when the question was asked because he doesn’t want to talk about the Mueller investigation or his plans to try and end it, which will no doubt be unveiled in the days ahead. But while he’s overseas, don’t be surprised if Mueller makes moves that prove he holds all the cards in the Russia probe.