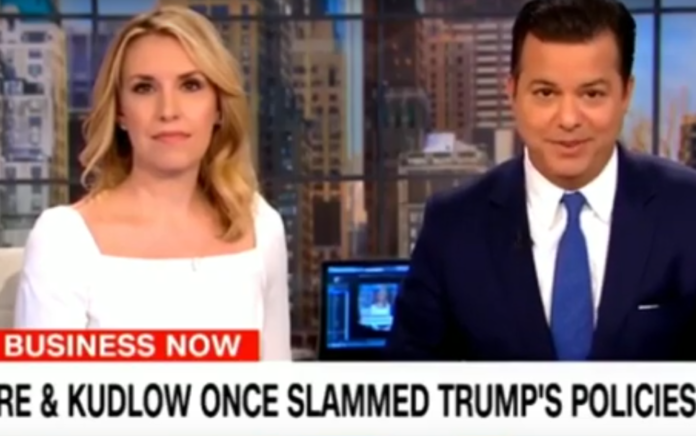 Two top advisers to President Donald Trump are desperately backing away from disparaging remarks they made about him in old audio that has resurfaced, drawing ridicule from CNN hosts Poppy Harlow and John Avlon.

Back in 2015 and 2016, White House economic adviser Larry Kudlow and Federal Reserve nominee Stephen Moore were not Trump’s lackeys. So, they felt free to criticize Trump’s policies.

“Two of President Trump’s advisers on the economy made some unflattering comments about then-candidate Donald Trump’s policies,” Avlon began. “CNN’s KFile have unearthed a 2015 radio interview with Larry Kudlow and Stephen Moore in which they disparaged President Trump.”

A grinning Avlon then tossed the segment to Christine Romans, who played the audio of Moore first.

She then played the audio of Kudlow’s remarks.

“Shocked a lot of people,” Kudlow said. “You know, going house to house and deporting illegals, repealing the 14th Amendment. The Republican Party is very much against what Trump wants.”

As we all know, Trump is a vengeful and petty man who seeks to punish any criticism against him.

Unsurprisingly, Kudlow and Moore sought to distance themselves from their earlier remarks.

“In a statement to CNN, Kudlow said now he never should have made those comments, calling it ‘speculative radio chatter that turned out to be wildly inaccurate,’” Romans reported. And Moore said, “he no longer supports going back to the gold standard he once did and told KFile he no longer wants to abolish the Fed.”

Harlow, Avlon, and Romans all ended up laughing at the pair of advisers, observing that they are engaging in flip-flopping. Avlon, who took Trump to the woodshed himself on Monday by busting Trump in several lies, concluded the segment by reminding viewers of Trump’s wrath.

“The president doesn’t take kindly to this criticism,” he said. “He has really doubled down in support of Stephen Moore even as Herman Cain’s prospects for the Fed have fallen away. Does that still look as secure?”

Trump is loose cannon when it comes to being criticized. His thin skin is always on full display and one has to wonder if Kudlow and Moore are going to be called to rug to kiss up to him. We’ll just have to wait and see.