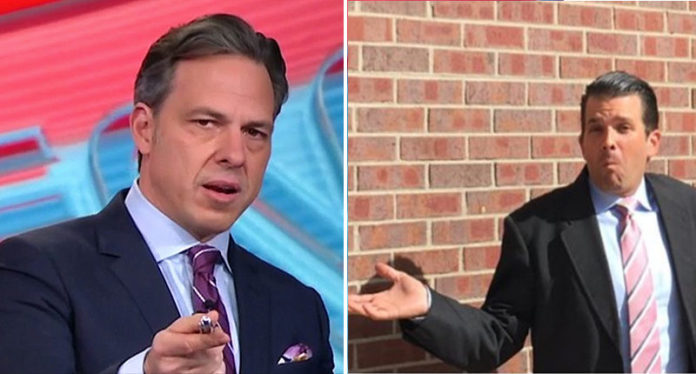 CNN host Jake Tapper is calling out Donald Trump Jr. for his assertion that the Mueller investigation hasn’t found any crimes that were committed by members of the 2016 Trump campaign.

“This is as political as it gets. Their dream in life is to try to find something to get Trump. I mean, it’s that old Stalinist tactic, you know? ‘Show me the men, and I’ll show you the crime.’

That led Tapper to lay a brutal fact check on Junior, remarking:

“Lying to Congress … is a crime. Criminal conspiracy to defraud the United States by interfering in the U.S. election which Mueller is charging with having done.”

And the CNN host didn’t stop there, adding:

Much like his father, Don Jr’s attacks on the Russia investigation are proof that they know there’s a raging fire behind all the smoke we’ve seen with the numerous indictments, guilty pleas, and related inquiries into the president’s possibly illegal business practices.

To say no crimes were committed and shout “witch hunt!” the way the president does on Twitter suggests that he’s worried and is acting as the result of a guilty conscience. And that holds true for Don Jr., too, who originally said he met with Russian nationals at Trump Tower in June of 2016 to discuss adoption but later changed his tune when the real purpose of the meeting was disclosed.

Junior wants us to believe he’s innocent, but his words and actions suggest otherwise. As Shakespeare once wrote in a slightly different form, Methinks methinks Don Jr. doth protest too much.