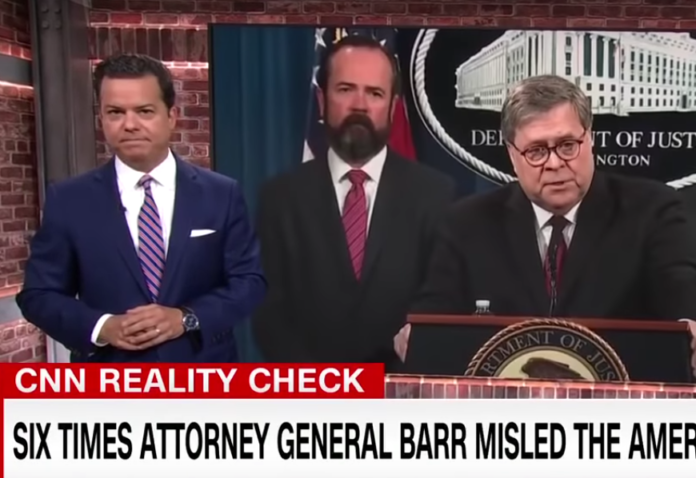 If Attorney General Bill Barr and President Donald Trump’s other defenders thought they could mislead the public about the Mueller report and get away with it, CNN’s John Avlon made it clear that they are wrong.

Special Counsel Robert Mueller’s Wednesday statement dropped several bombshells, including confirmation that the only reason why Mueller did not charge Trump with a crime is that DOJ policy prevented him from doing so. Mueller also pointed out that if they had determined Trump committed no crimes, they would have put it in their report. Instead, several instances of obstruction are listed in the report and Mueller left it up to Congress to impeach Trump since he couldn’t indict him.

In the process, Mueller countered Barr’s previous spin and revealed him to be a liar.

“This is what happens when the last honest man in Washington confronts a blizzard of lies,” Avlon said of Mueller’s statement. “We now know that President Trump was never in danger of being indicted, not because he was cleared of wrongdoing, but because Mueller felt he was constitutionally constrained by the Office of Legal Counsel’s guidance.”

“But there’s a screaming contrast between what Attorney General Bill Barr said, and what Robert Mueller clearly meant,” he continued.

Avlon noted that a CNN analysis reveals that Barr misled the public about the Mueller report six times, and played clips of Barr’s claims compared with Mueller’s to demonstrate the differences.

While Mueller said he was blocked from charging Trump because of the Office of Legal Counsel, Barr claimed the opposite in his press conference designed to spin the report just before its release.

“It certainly sounds like if he was anybody but the president, he would have been indicted,” Avlon said.

But the bottom line is that while the investigation is over, Russia is still poised to attack our democratic process again to help Trump win in 2020.

“The Mueller investigation is over, it did not exonerate the president,” Avlon concluded. “Attorney General Barr did misrepresent the report’s conclusions and constraints. And the Russians will continue to try and influence our elections because they did so to help the president the last time around despite his denials, and there’s every indication they’ll try to do it again.”

Avlon’s words could not have been more prophetic because just this morning Trump admitted that Russia helped him win the 2016 Election before he deleted the tweet and had a meltdown about the Mueller report and the probe.

House Speaker Nancy Pelosi (D-Calif.) is right. Trump is “engaged in a cover-up,” and he and Barr should be impeached immediately.