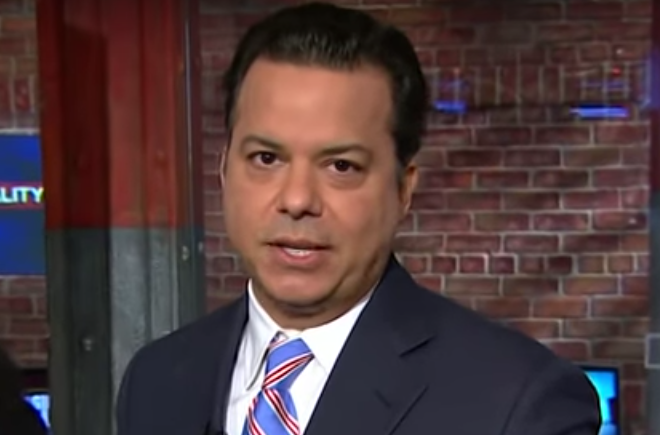 CNN’s John Avlon busted Republicans on Monday for trying to spin President Donald Trump’s cave on the government shutdown as true “leadership” before going on to explain what kind of deal Trump can expect from Democrats because of his weakness.

On Friday, Trump agreed to sign the same continuing resolution passed by the Senate in December after a 35 day shutdown over his wall demands. Most agree that Trump’s surrender is a big political defeat, but Republicans tried to portray it as some sort of win.

Democrats have held our government hostage for weeks, but thanks to President @realDonaldTrump‘s leadership, the government will reopen and federal workers will be paid in the next few days.

“Look, I get that their job is partisan spin but that’s a total rewriting of recent history,” Avlon continued. “We all heard President Trump say he’d own the shutdown and presumably, that’s why polls showed a majority of Americans blaming him for it.”

Indeed, polls showed Americans overwhelmingly blamed Trump for the shutdown and oppose his wall on the southern border.

Avlon then pointed out that this end to the shutdown is temporary since Trump has already threatened another shutdown in three weeks if he doesn’t get his way.

“What we’ve got here isn’t an end to the shutdown as much as a 3- week ceasefire,” he said. “The good news is that there isn’t much of an appetite on either side to shut down the government again. The bad news is that this new Congress combines a more conservative Senate with a much more liberal house.”

Avlon then explained the common ground between Democrats and Republicans that could produce a seriously good deal.

“Both sides have signaled support for things like more money for technology that can detect weapons and drugs at the border, more immigration judges, border patrol agents, and humanitarian aid for migrants,” he said. “There may even be a shot at giving Dreamers a path to citizenship that could sweeten the deal significantly for Democrats.”

The wall, however, probably won’t get approved, at least not the kind of wall Trump wants.

You see, both Democrats and Republicans agree that walls don’t work. Wall experts agree that a wall on the border would be very costly, up to $50,billion just to build, and would cause all sorts of logistical and environmental problems, not to mention cost billions to maintain.

That being said, Trump’s ineffective physical barrier could easily become a “smart wall” that is invisible because border patrol could utilize more technology such as sensors and drones to detect activity. It’s not the eye-sore wall that Trump wants so he can point at it and say he got a wall, but it’s a wall nonetheless and one that will be far more effective, less costly, and will not require eminent domain lawsuits to take property away from landowners.

Even Trump himself has recently admitted: “We do not need 2,000 miles of concrete wall from sea to shiny sea. We never did.”

The deal could also include legislation to outlaw government shutdowns, thus taking the threat of one off the table in all future policy debates.

But Trump is really the only one standing in the way of such a deal. His stubbornness to accept a deal that upgrades border security in a meaningful way and solves other immigration issue makes it likely that any vote in Congress needs to be veto-proof, and Trump is also not likely to approve of Congress taking away his ability to sow chaos through a shutdown.

“We need to have a fact-based, not fear-filled debate on these issues if we’re going to make any kind of bipartisan progress,” Avlon concluded. “And, President Trump isn’t helping.”

“What we’ve got here isn’t an end to the shutdown as much as a three week ceasefire.” @JohnAvlon takes a look at where we stand on the shutdown and the bills being proposed to ensure it doesn’t happen again #RealityCheck pic.twitter.com/wpW53EeUQj

Signing such a bill would be Trump’s best option since he would be to blame for any shutdown resulting from a veto. Republicans would also stand to lose big if they support Trump’s veto instead of standing up to him. Both sides, including Trump, stand to gain from such a deal. The question is will Trump stand in his own way as usual.