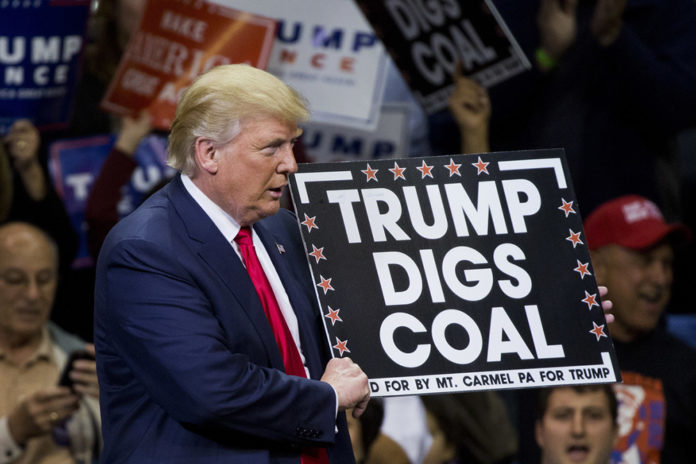 Donald Trump has duped coal miners so thoroughly that many are refusing to learn new skills as the industry fails around them.

“We’re going to bring the coal industry back 100 percent.” – Donald Trump to an audience in Virginia

“Miners, get ready because you’re going to be working your asses off.” – Donald Trump at a rally in West Virginia

Residents of coal country voted for Trump by large margins, according to AlterNet. The industry was already dying and still is. Demand has lowered, and coal plants have shut their doors. The evidence is widespread that the coal industry will never return to its former glory. In a sane world, the government would be pumping money into transitioning affected workers into clean energy jobs.

Instead, Donald Trump is leaving workers with false hope. Workers are turning down federal and state job training opportunities that could lead to new jobs and steady incomes and are clinging to Trump’s promise to turn the industry around.

A writer for Reuters, Valerie Volcovici, spoke with “more than a dozen former and prospective coal workers, career counselors, and local economic development officials.” Volcovici found that in parts of Pennsylvania, delusional optimism about the comeback of coal, directly fed by Trump’s claims that he’ll revive the industry, is deterring workers from learning new skills.

“I think there is a coal comeback,” said Mike Sylvester, a miner’s son who signed up for a coal mining course at a local career training center. The center offers training in everything from computer programming to nursing.

“I am optimistic that you can make a good career out of coal for the next 50 years,” said Sean Moodie, one of two brothers who spoke to Volcovici.

The problem here is not misplaced optimism. It’s pure delusion, fueled by both desperation and a wildly exploitative White House.

33,500 jobs have disappeared from the area since 2011, according to Appalachian Regional Commission number cited by Reuters. Despite the dismal job statistics, the career retraining programs in southern Pennsylvania are less than 20 percent full.

“I can’t even get them to show up for free food I set up in the office.” – David Serock, former miner and Fayette County career training center employee

Despite Trump’s projected optimism, Robert Murray, CEO and owner of the “largest U.S. private coal mines”, told CNN Money that he has repeatedly urged Trump to tone down the promises of the coal industry resurgence.

When industry CEO’s have given up trying to revive the industry, that’s a surefire sign that it’s over.

“I’ve suggested to Mr. Trump that he temper his expectations,” said Murray. He added that coal industry employment “can’t be brought back to where it was before the election of Barack Obama.”

Trump’s economic adviser and the director of the National Economic Council Gary Cohen has even touted other energy forms as superior to coal.

“Coal doesn’t even make that much sense anymore as a feedstock. If you think how [much] solar and how much wind power we’ve created in the United States, we can be a manufacturing powerhouse and still be environmentally friendly.” – Cohen to CNN Money

Here is yet another reason to remove the President from office. It’s time to elect politicians who want to see our energy sector move on to broader horizons.