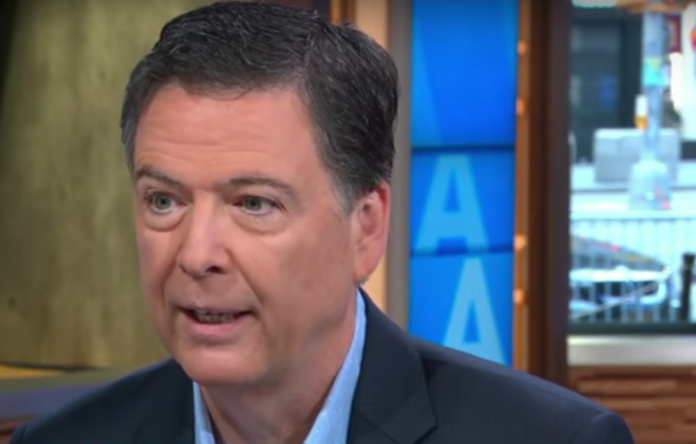 Former FBI Director James Comey called out President Donald Trump on Tuesday morning for demanding that he be jailed for imaginary crimes he didn’t commit.

On Friday, Trump began lashing out at Comey over the release of excerpts of his book “A Higher Loyalty,” in which Comey criticizes Trump’s lack of morality and unethical behavior.

Trump not only accused Comey of committing crimes but called for him to be prosecuted and jailed.

James Comey is a proven LEAKER & LIAR. Virtually everyone in Washington thought he should be fired for the terrible job he did-until he was, in fact, fired. He leaked CLASSIFIED information, for which he should be prosecuted. He lied to Congress under OATH. He is a weak and…..

….untruthful slime ball who was, as time has proven, a terrible Director of the FBI. His handling of the Crooked Hillary Clinton case, and the events surrounding it, will go down as one of the worst “botch jobs” of history. It was my great honor to fire James Comey!

The big questions in Comey’s badly reviewed book aren’t answered like, how come he gave up Classified Information (jail), why did he lie to Congress (jail), why did the DNC refuse to give Server to the FBI (why didn’t they TAKE it), why the phony memos, McCabe’s $700,000 & more?

Comey drafted the Crooked Hillary exoneration long before he talked to her (lied in Congress to Senator G), then based his decisions on her poll numbers. Disgruntled, he, McCabe, and the others, committed many crimes!

Up to now, Comey had not responded to Trump’s Twitter tantrum, but he did exactly that during a live interview with George Stephanopoulos on ABC. Comey said of Trump’s call to have him jailed that:

“That is not normal, that is not okay. First of all, he’s just making stuff up. But most importantly, the President of the United States is calling for the imprisonment of a private citizen, as he’s done for a whole lot of people who have criticized him. That is not acceptable in this country…The president doesn’t get to decide who goes to jail.”

Indeed, Trump has called for many people to be put in prison, including former Secretary of State Hillary Clinton, former Clinton aide Huma Abedin, three UCLA basketball players, rapper Snoop Dogg, and people who burn the flag, just to name a few.

Comey then warned Americans that this kind of behavior from the president should chill them to the bone and they can’t afford to become numb to these kinds of attacks.

“I think that’s a danger, that we’re numb to it. We wake up in the morning and see the President of the United States is accusing people of crimes, without evidence, and pronouncing them guilty and saying they should be in jail. That should wake all of us up with a start, but there’s been so much of it that we’re a little bit numb, and that’s dangerous.”

Trump is undermining the rule of law by accusing people of committing crimes without evidence and calling for jailing them. If he can do that to well-respected public servants like James Comey, he can do it to any American who criticizes him, and that is wholly un-American.

Instead of letting Trump get away with it, Americans should be demanding Congress remove him from office. Trump is acting like a dictator, not an American president.