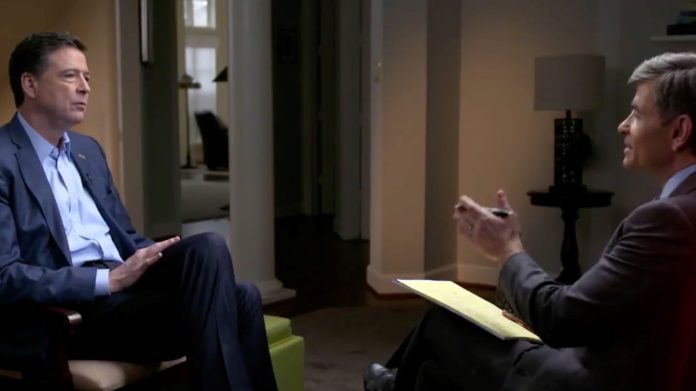 Former FBI Director James Comey has a new book which will be released next week, and this Sunday on ABC News he’ll be discussing his soon-to-be bestseller.

Axios reports that when Comey sat down with George Stephanopoulos, he stunned the host and crew when he compared President Donald Trump to a “mob boss.”

Another source familiar with the interview told Axios that the Comey interview will “certainly add more meat to the charges swirling around Trump.”

What else can we expect from Comey? Reportedly he will reveal information he hasn’t talked about since Trump dismissed him in May of 2017. Trump later said he had done so because of the Russia investigation being conducted by the FBI and Department of Justice which is focused on possible collusion between members of the Trump campaign and Russia.

Comey’s book, A Higher Loyalty: Truth, Lies, and Leadership, will be released on April 17, and the White House is said to be very nervous about what the former FBI chief will reveal.

All of this comes just days after the FBI searched the office and two residences belonging to the president’s personal attorney, Michael Cohen. Trump is said to be furious and looking for ways to end the probe being conducted by Special Counsel Robert Mueller.

Shortly after the search of his attorney’s office, Trump took to Twitter and lashed out: