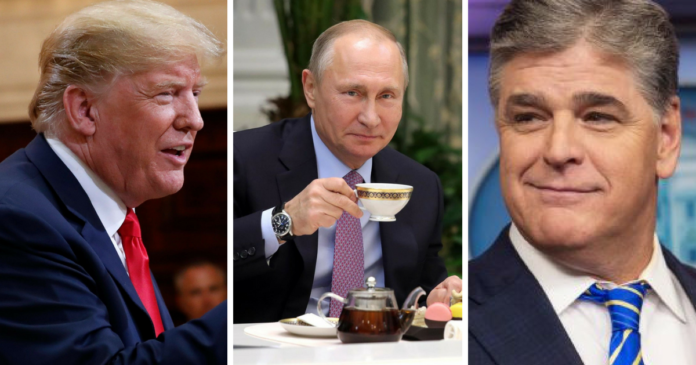 Though it sounds like something too unreal to possibly be true, we now have reports from Russia that the wake of the release of the report from Special Counsel Robert Mueller last week, Russian state television is now running hours upon hours of Fox News programming, including Sean Hannity’s show.

“Russian state media is nonetheless trumpeting the reaction of U.S. conservatives to the (Mueller) report, which found that the Trump campaign was not complicit in those election-meddling efforts, as evidence of a broad anti-Russian conspiracy in the U.S. And it’s using at least one prominent American conservative voice to do so.

You simply cannot make this stuff up.

The reruns of Hannity and other Fox prime time programming were first spotted by Julia Davis, who observes and writes on what Russians are seeing on their TV screens each day:

Perhaps none of this should surprise us, considering that, for all intents and purposes, Fox itself is a form of state TV, only too happy to broadcast pro-Trump propaganda 24 hours a day. And of course Hannity is one of the most eager Trump disciples, regularly defending the president and spinning wild conspiracy theories that are right up there with those found on Alex Jones’ InfoWars website.

But just the fact that the official state broadcasts in Russia are now featuring anything from American television is stunning and would seem to prove a larger point that many have been making for years now: Fox News is not in the news business and never has been. They exist for one purpose: To spread the GOP gospel and bash anyone who dares to disagree.

We know that Russia did indeed attack the 2016 election. And now it would appear they’ve also managed to partially co-opt Trump’s favorite source of information.

If all of this wasn’t so tragic and terrifying, it would almost be comical.