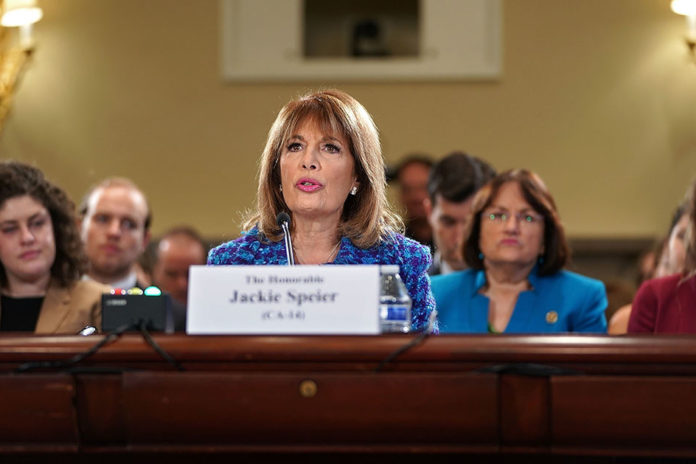 Congress is taking action to prevent sexual harassment in the workplace after allegations from two female workers surfaced.

The two women remained anonymous while accusations were discussed at a House hearing on Tuesday.

In the case of one of the incidents, a male lawmaker asked a young female staffer to bring some paperwork to him at home; he answered the door in nothing but a towel.

“At that point, he decided to expose himself. She left. And then she quit her job,” said Rep. Barbara Comstock.

‘This is about a member who is here now; I don’t know who it is. But somebody who I trust told me the situation.” – Rep. Barbara Comstock (R-VA), member of the House Administration Committee.

How on Earth do men delude themselves into believing women find such behavior attractive?

The answer: it’s about power. These men are aroused by seeing women powerless and under their control.

Rep. Jackie Speier (D-Calif.) also spoke about harassing behavior by some of her colleagues.

“In fact, there are two members of Congress, Republican, and Democrat, right now, who serve, who have not been subject to review, but have engaged in sexual harassment.”

Currently, sexual harassment training is optional. That is unacceptable given how pervasive these incidents are. Not to mention many healthcare professions, among others, training is mandatory. Speaker of the House, Paul Ryan, took a break from punishing the poor on Tuesday to announce that the House will move to adopt mandatory training for harassment and discrimination in the workplace.

“Our goal is not only to raise awareness, but also make abundantly clear that harassment in any form has no place in this institution.”

Rep. Bradley Byrne (R-Ala.), a former employment attorney, urged including a universal harassment policy. The fact that such a policy doesn’t already exist is ridiculous. Byrne also suggested that the Code of Official Conduct for lawmakers should expressly prohibit sexual relations with their staff.

“It is my opinion that given the inherent power differential between a member and their staff that they supervise we should include a strict prohibition on members engaging in sexual relationship with staff under direct supervision.”

Byrne also called for transparency in the case of settlements paid out in harassment cases through the use of tax dollars. Currently, claims against lawmakers and settlements paid are not disclosed to the public.

Us, too. But mostly, the fact that there is not a system in place to protect the victims is the most alarming. Perhaps Rep. Jackie Speier put it best:

“I’m not convinced the system we have in place protects the victim at all.”