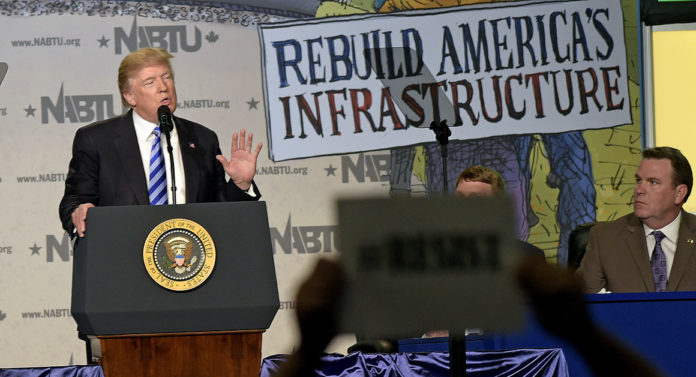 Now that he knows he’s facing a difficult re-election in 2020, President Donald Trump is suddenly reaching across the aisle in an attempt to craft legislation that would rebuild the nation’s crumbling infrastructure.

Democrats say they’re on board with the president’s $2 trillion plan, but congressional Republicans are pumping the brakes and saying any bill which increases the deficit won’t have their support.

The Hill reports there’s tremendous skepticism from the GOP when it comes to helping Trump with his grand infrastructure plan:

“Congressional Republicans say they are worried about passing a reprise of former President Obama’s 2009 fiscal stimulus, which was devoted to ‘shovel ready infrastructure projects and ‘green’ energy production.

“That legislation added more than $800 billion to the debt and later became a focal point of GOP charges that Obama had blown up the deficit.”

And therein lies the larger problem: In order to pay for such a ambitious plan and it be deficit neutral, gas taxes would have to be raised, and even then the numbers don’t add up, Thune warned:

“I think $2 trillion is really ambitious. If you do a 35-cent increase in the gas tax, for example, indexed for inflation, it gets you only half a trillion.”

Raising taxes with a presidential election around the corner in 2020? Sounds like a recipe for disaster.

How do you pay for it? That’s the biggest question — that’s the hardest part,”

Mark Meadows (R-NC), who serves as leader of the ultra conservative Freedom Caucus, was even clearer when it came to taxes to pay for infrastructure:

“You would have to have a gas tax to do it, and we’re not for a gas tax. I mean, $1 trillion you could maybe do; $2 trillion, there is no way to get the money other than raising taxes and there is not an appetite for an increase in taxes by Republicans in the House or the Senate.”

Translation: The infrastructure bill is dead on arrival, and Trump can’t blame anyone but members of his own party.