The United States Blues
Home Politics Congress Congressmen shared pics saying they were at Trump’s wall on the border... 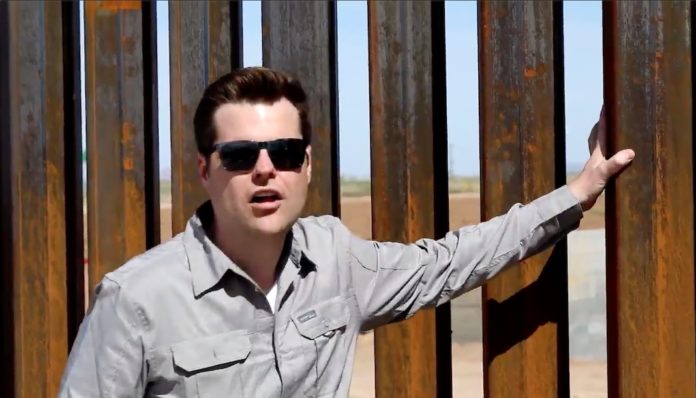 Trump took to Twitter to declare “Big sections of Wall now being built!” after a group of Republican Congressmen posed with wall prototypes 100 miles from the border. Several of those Congressmen suggested they were really looking at the start of the wall at the border, but it’s all a lie.

Two questions: Do Republicans realize Trump’s wall is just a prop for his presidency? Is a photo-op all that is needed to convince Trump supporters that their monument to racism is finally underway? If so, why not just build a model and share pictures of it?

That’s exactly what they did.

This morning, Trump decided he would reprimand Democrats for taking “Vacations” while patting himself on the back for the start of his wall.

MSNBC host Lawrence O’Donnell responded with a funny question. Does this mean Trump’s constant golf outings on the taxpayer dime are out?

“Trump just announced he won’t have golf ‘Vacations’ until immigration laws are changed. I think that’s what he means, right?”

Trump just announced he won't have golf "Vacations" until immigration laws are changed. I think that's what he means, right? https://t.co/zLcHS67zjc

Trump’s Tweet comes right after a group of congressmen visited Coolidge, Arizona. The location was the site of a wall prototype demonstration. The local Fox affiliate covered the event. You can see exactly how far away they were from the border below.

Share Blue noted that the construction company putting on the demonstration was Fisher Industries.

Following the congressmen’s visit, three of the group decided to share pictures with the wall prototypes, making inaccurate claims.

He claimed, “The Wall is being built!” without clarifying it’s a prototype.

The Wall is being built! #BuildTheWall pic.twitter.com/w6svwkMc9w

Gaetz also shared a video in which he said, “I’m on the southern border of the United States in Arizona looking at the construction and infrastructure technology that allows workers to secure our border.”

The sounds of construction trucks and workmen loudly making noises are especially helpful in painting the picture that Gaetz is trying to sell Trump supporters.

I'm on the southern border of the United States in Arizona looking at the construction and infrastructure technology that allows workers to secure our border. #BuildTheWall @RepAndyBiggsAZ pic.twitter.com/i7OpfMyOfM

Humorously, Gaetz then retweeted the same video with captions from Breitbart News that correctly state that the congressman is showing off a prototype.

Rep. Dusty Johnson (R-SD) was another of Trump’s cheerleading congressmen, sharing a Tweet that stated, “Reviewing construction at the border.”

Reviewing construction at the border pic.twitter.com/TQ8FYinPcN

Another slightly misleading Tweet came from Rep. Pete Stauber (R-MN), who said, “I’m glad to be at the southern border this week” above a picture as he stands at the wall prototype 100 miles from the border.

I’m glad to be at the southern border this week to talk to border patrol officials about their experiences and learn more about what they need to completely secure our border. pic.twitter.com/HLDESnTZkb

Local news has also shared videos that imply that Trump’s wall is under rapid construction as we speak.

Share Blue pointed out that other Republicans in the group were not deceptive about their posts, accurately stating they were witnessing construction options at Fisher’s facilities.

The Washington Examiner noted that the Army Corps of Engineers hasn’t chosen the company that will build the wall, which has not been funded by Congress anyway.

The net effect of these efforts is to help paint a false picture of what’s actually happening at the border. Imagine that.

After a decade of declining border crossings, Trump and Stephen Miller’s hardline immigration policies have made the problems far worse. Trump’s followers will most likely be satisfied with Trumpian fake news about the southern border. We, however, expect our representatives to be honest and find the best solutions based on reality, facts, and the basic understanding that immigrants are human beings.