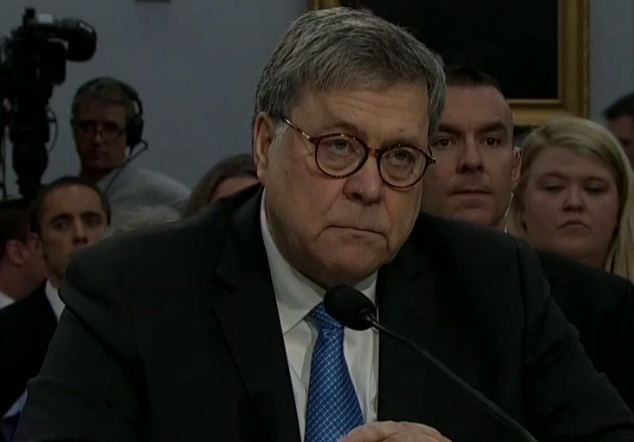 Attorney General William Barr appeared before the House Appropriations Committee on Tuesday, giving Democrats the chance to grill him about his pathetic summary of the Mueller report he refuses to release.

Barr has been hiding the report to protect President Donald Trump even though it doesn’t exonerate him, drawing accusations of cover-up that cast doubt on Barr’s minimal summary of the 400-page document.

The House Judiciary Committee has subpoenaed the report, but Barr apparently intends to fight it in court while Republicans claim that Democrats must impeach Trump if they want to see the full report.

During the hearing on Tuesday, Rep. Nita Lowey (D-N.Y.) took Barr to the woodshed for being Trump’s new fixer.

“I want to address a serious oversight matter: your unacceptable handling of special counsel Robert Mueller’s report,” Lowey began. “It’s been reported that the report is 300 to 400 pages, and I use the term ‘reported’ because we have no idea how long it actually is. All we have is your four-page summary which seems to cherry-pick from the report, to draw the most favorable conclusion possible for the president. And in many ways, your letter raises more questions than it answers.”

Indeed, members of Mueller’s team say that the report is more damning to Trump than Barr has portrayed and there is likely lots of evidence and testimony included in the report that sheds light on Russian collusion and obstruction of justice.

Lowey then hammered Barr for being so quick to issue his summary.

“I must say it is extraordinary to evaluate hundreds of pages of evidence, legal documents and finding based on a 22-month-long inquiry and make definitive legal conclusions in less than 48 hours,” she said. “Even for someone who had done this job before, I would argue it’s more suspicious than impressive.”

And she surmised that Barr went so quickly because he had already made up his mind long before Trump ever nominated him to his current position.

Barr wrote a memo attacking the Russia probe and Special Counsel Robert Mueller in early 2018, even going so far as to claim that it’s impossible for the president to obstruct justice.

“Your audition clearly went well,” Lowey said. “I look forward to reviewing the Mueller report myself. I know my constituents do as well. The American people deserve the facts.”

“All we have is your 4-page summary, which seems to cherry-pick from the report to draw the most favorable conclusion possible for POTUS… it’s more suspicious than impressive.” pic.twitter.com/qN5Vnro7CV

Barr can expect similar grillings every time he testifies in front of a congressional committee. His effort to hide the report is wrong and flies in the face of transparency and democracy. This report should have been made public from the moment Mueller turned it in. Because right now, Barr’s summary and effort to bury the report make Trump look guilty. If the report really clears him, releasing it in its entirety should not be a problem.