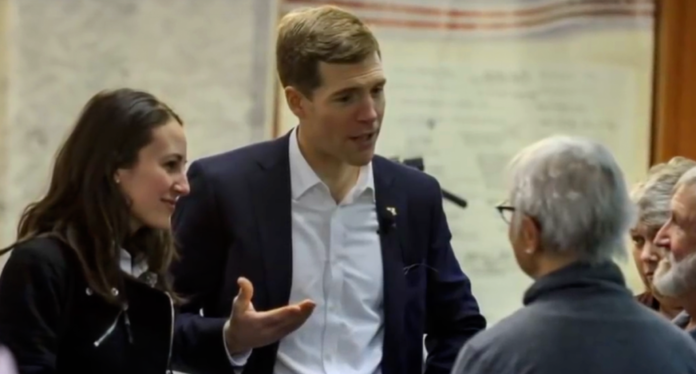 Democrats are hoping another election upset will make Conor Lamb, a 33-year-old former Marine, and prosector, the next Congressman for the 18th congressional district in Pennsylvania at March 13 special election. The race is neck-and-neck with the Republican candidate endorsed by President Donald Trump.

Trump won the district by nearly 20 percentage points, but as we’ve seen in other elections recently, the Democrats are seeing a surge of voters turning the tide against Republicans who enable Donald Trump.

The election will be a litmus test of which is more abhorrent to the local Republicans: A man wrongly branded as a Nancy Pelosi (D-Calif.) liberal or Donald Trump.

His opponent, Rep. Rick Saccone (R) is a staunch Trump supporter, even now, known for sponsoring a bill to post “In God We Trust” in all the schools of the Commonwealth. Proud of his support for Trump, he said:

“I was Trump before Trump was Trump.”

"A Marine Corps officer. A federal prosecutor. Conor Lamb has committed himself to public service. He'll be a strong voice for working people. Join me in supporting him in the #PA18 election on March 13." – @JoeBiden

The area of western Pennsylvania was once reliably Democrat but shifted toward Republican, due to feelings of alienation as the party shifted further left. A majority voted for Walter Mondale in 1984, and yet in recent years supported Mitt Romney and John McCain.

The district is 93-percent white, predominantly working-class residents, and Democrats actually outnumber Republicans by 70,000 in this part of “coal country.” There is a strong union presence, which traditionally bodes well for Democrats.

“Many of these up-for-grabs constituents don’t fit any neat political typologies: They’re gun-owning seniors who want to make sure their entitlement programs are protected. They champion the fracking boom that has revitalized the region’s economy, but also care about clean air and water. They’re compassionate towards immigrants, but want them to learn English and assimilate into American society.”

Conor Lamb seems poised to fit precisely in the mold that locals are looking for: A candidate leaning moderate on social issues as well as taking a stance of economic populism empowering “the common people.” He can relate to the area and represent it with experience, as a man born and raised in the suburbs of Pittsburgh to a family of Irish Catholic Democrats.

His family includes notable former politicians including his grandfather, who was the Democratic majority leader in the Pennsylvania Senate, and his uncle who is Pittsburgh’s controller.

Here’s a quick look at where he stands on some key issues for people in the area:

The special election is taking place because former U.S. Rep. Tim Murphy resigned in October 2017 after a scandal. He asked a woman with whom he’d been having an affair to get an abortion, although he had voted for a bill that would outlaw abortions after 20 weeks. He had been praised by conservative Christian groups for his anti-abortion stance and his “family values.”

Republicans are well-aware of what’s at stake in the election to replace Murphy. Republican-linked groups have outspent their Democratic rivals here 17-to-1, but Lamb is hopeful that his efforts to talk one-on-one to his potential constituents, and his frank, honest, and personal approach will win the day. He has kept his approach local, rather than seeking national media attention.

“FDR said one time that the true test of government was that people wanted to know that their government walked on the same side of the street that they did. So, that’s the impression I want people to be left with: Not necessarily what my policy papers say, just that I’m accessible and that I’m one of them—that they can always find me, and trust me to at least tell them the truth.”

Great conversations with voters today at Giant Eagle in Bethel Park. Reminding everyone I see that today's the last chance to register to vote before the #PA18 special election on March 13th. pic.twitter.com/iS61ce9Kxm

The nation will watch the race closely, as it could be a bellwether for the 2018 midterm elections. A loss would be one more sign that the blue tsunami is growing and will wash away Republicans who support Trump.

See more in the video below: