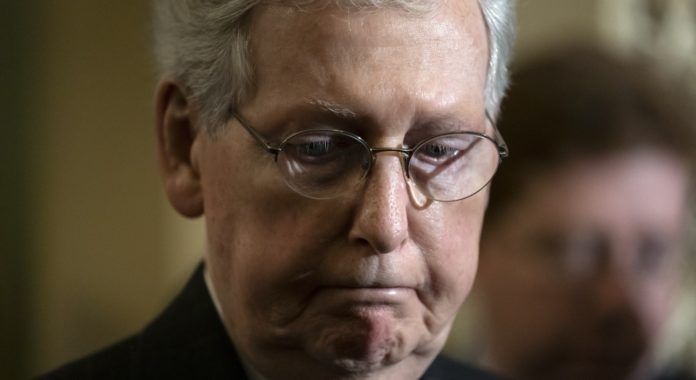 With the 2020 election now less than a year and a half away, some influential conservative activists are pressuring Senate Majority Leader Mitch McConnell (R-KY) to support increased funding for technology that would make U.S. elections more secure, CNN reports:

Anti-tax activist Grover Norquist and Freedomworks President Adam Brandon issued a call Wednesday for Congress to allocate additional money for election equipment upgrades and to mandate that elections use paper ballots that can be used for an independent audit.

“We benefit from more secure elections. We benefit from being able to double-check,” Norquist told CNN ahead of a news conference announcing his position. “I expect to be winning elections for the next 20 years and I don’t want the Democrats to explain that every single one of those was stolen. So let’s make it ironclad.”

Many who advocate for election security have noted that the issue should be non-partisan, but McConnell and many of his fellow Republicans have argued that election security would only serve to boost the political fortunes of Democrats.

Norquist says he supports the Secure Elections Act, a bipartisan bill introduced last year by members of the Senate Intelligence Committee, which is chaired by GOP Senator Richard Burr (NC). That legislation would provide funding for states to replace their all-digital voting machines if the money was used to purchase equipment that provides paper ballots.

But so far, the Majority Leader has steadfastly refused to allow debate or votes on any such bills:

Democrats largely place the blame on McConnell, a Kentucky Republican who has refused to pick up various election security bills that have passed the Democrat-led House. Senate Minority Leader Chuck Schumer, a New York Democrat, has said Democrats will push for an amendment to boost election security funding at a markup of several bills in the Appropriations Committee on Thursday.