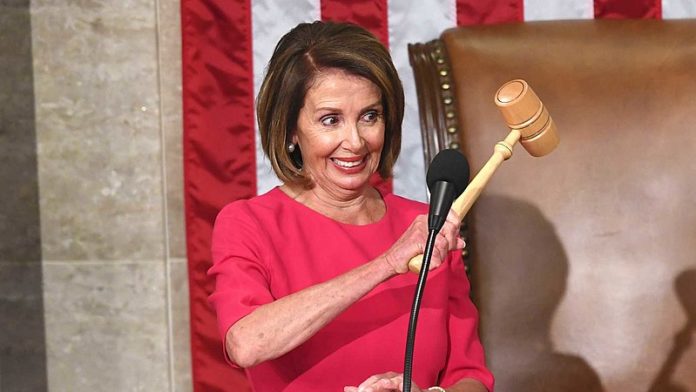 Democrats should consider why House Speaker Nancy Pelosi (D-Calif.) wants to hold off on impeaching President Donald Trump, especially since a conservative columnist offered an argument that should cause Republicans to panic.

On Monday, Pelosi explained to the Washington Post that she doesn’t want to impeach Trump, arguing that it would be too divisive even though most Americans support impeachment.

“I’m not for impeachment,” Pelosi said. “Impeachment is so divisive to the country that unless there’s something so compelling and overwhelming and bipartisan, I don’t think we should go down that path, because it divides the country. And he’s just not worth it.”

But that’s not the real reason why Pelosi is brushing off impeachment talk.

As conservative writer Benjamin Parker wrote in his latest column on Tuesday, Pelosi is betting on the American people to impeach Trump themselves in 2020.

“Pelosi wants to be able to run against Trump,” Parker wrote. “He has historically low approval ratings and historically high disapproval ratings. At no point in his presidency has he had net favorability, including immediately after his inauguration, when most presidents enjoy a grace period. At his best mark ever, he was net unfavorable by 2 percent; at his worst, 25 percent. Running against Trump was a winning strategy in the 2018 midterms, which saw Democrats gain 40 House seats and a 7 percent popular vote margin with record turnout. Pelosi would be foolish to change that formula.”

He’s not wrong. Democrats made huge gains in the House, plus they captured governorships and state legislatures and even managed to win in places that were once Republican strongholds such as in Orange County, California and won a Senate race in red state Arizona. All by running against Trump and his terrible behavior and record, which Parker went on to compare unfavorably to former President Barack Obama.

Trump supporters, instead of gloating, should consider why Pelosi’s stance is not crazy. For starters, Trump isn’t that effective. Judicial appointments aside, many of his more consequential and signature “achievements” (if you can call them that)—the Muslim ban, reducing regulations, the sequential summits with dictators and thugs—have been unilateral executive actions with no more staying power than Obama’s. Unlike Obama, Trump couldn’t shepherd a massive healthcare bill through Congress, or an infrastructure bill, or any other major legislation apart from a tax cut—and even Obama supported that.

It should be pointed out that Obama did not support massive tax cuts for the wealthy, which is what Trump’s tax cuts are, and that’s why many Trump supporters are rightfully blaming Trump for their larger tax bills this year.

Parker concluded by warning the GOP that they should be worried about Pelosi’s political calculation.

Republicans should consider whether the man they elected “because he fights” actually scares the other side that much at all. He sold himself as the man who would go to war with the Democrats and could finally #win for the first time ever. If the Democrats have seen him in action for two years and have decided they want him around for two more, he’s not an asset to the conservative movement.

Pelosi’s smart to want Trump to be the Republican standard-bearer for the foreseeable future. Are Republicans?

Again, he’s not wrong. Pelosi has outmaneuvered Trump at every turn. She held her ground during the 35-day government shutdown, which most Americans overwhelmingly blamed Trump for until he surrendered by signing the original spending resolution he should have signed in December.

Trump also caved to Pelosi when she canceled the State of the Union during the shutdown despite Trump’s effort to bully her into letting him deliver the speech.

There’s simply no reason to believe that Pelosi is not making a similar political calculation for 2020. The longer Trump stays in office, the more Americans will want to replace him in 2020 and Republicans will lose their main talking point of accusing Democrats of wanting to impeach Trump for political reasons.

As it turns out, Democrats may actually want to not impeach Trump for the same reasons. And Republicans should be terrified.