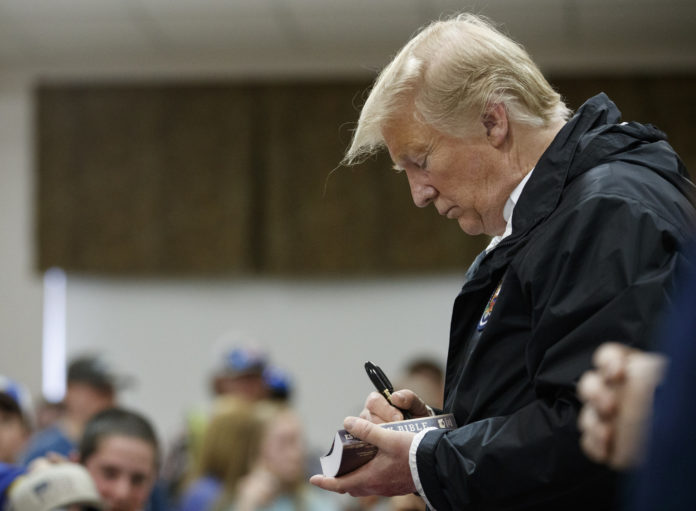 President Donald Trump’s desire to continue separating children from their parents at the border has conservative columnist Matt Lewis calling out evangelicals for choosing Trump over Jesus and violating foundational Christian values.

Trump fired Homeland Security Secretary Kirstjen Nielsen on Sunday of all days because he wants to treat immigrants much harsher than he already does, which includes ramping up his family separation policy.

But such a policy is a complete repudiation of Christian principles that Trump claims to share with his evangelical supporters.

Instead of condemning him or rejecting him, however, evangelicals are embracing him and his policies even more. And it drew a sharp rebuke from Lewis in his column for The Daily Beast on Tuesday.

“Separating parents from their children is a moral disaster,” Lewis began. “Judges or no judges, there’s no way a devout person can justify supporting this.”

Noting that Democratic presidential contender Pete Buttigieg has slammed evangelicals for being hypocrites, Lewis goes on to cite the Bible directly to make his case that Christians should be welcoming migrants and caring for them.

“One need look no further than biblical scripture to find guidance that is relevant to the border policy,” he wrote. “Exodus 23:9 says, ‘Do not oppress a foreigner; you yourselves know how it feels to be foreigners, because you were foreigners in Egypt.’ Hebrews 13:2 says, ‘Do not forget to show hospitality to strangers for by doing that some have shown hospitality to angels without knowing it.’”

Lewis then reminds evangelicals that the Bible specifically talks about how we should treat children.

“When it comes to separating children, I’m reminded of the book of Matthew, where Jesus says, ‘Whoever welcomes one such child in my name welcomes me’ and ‘See that you do not despise one of these little ones. For I tell you that their angels in heaven always see the face of my Father in heaven,’” Lewis wrote.

“By failing to condemn Trump’s border policies, evangelicals on the right are turning a blind eye to the lessons of the Bible and Ronald Reagan,” he concluded. “Is nothing sacred?”

Apparently so. Evangelicals sold their souls to Trump in 2016 and they don’t want them back. Even after Trump got caught committing campaign finance felonies to cover-up his extramarital affairs, evangelicals still did not abandon him. Trump has also been cruel to the poor, used crass language, incited violence and has behaved in a way that most Christians should find embarrassing and unacceptable to the church.

Yet they still support him and undermine their own message in the process. If they want to know why more Americans are rejecting Christianity and organized religion, that’s why.