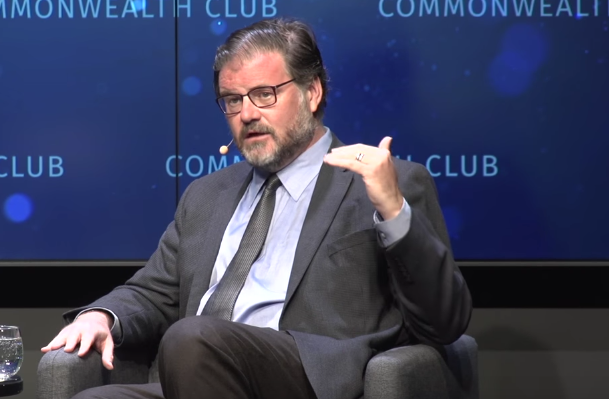 President Donald Trump is going to go down in flames because of his terrible character, writes conservative columnist Jonah Goldberg.

As Trump continues to fire top staffers and lash out at everyone because he’s not getting his way, Goldberg wrote an op-ed for the Los Angeles Times predicting that Trump’s presidency is doomed to end poorly because “character is destiny.”

“As we celebrate Christmastime amid an unnecessary and indefinite government shutdown and the worst December for the stock market since 1931, I’m reminded once again of my longstanding prediction: The Trump presidency will end poorly because character is destiny,”

Trump’s behavior has resulted in these uncertain and unstable times for our nation despite inheriting a strongly recovering economy and stronger alliances around the globe from former President Barack Obama.

His inability to control himself has unraveled all of that progress and we now face the brink of a disaster.

But it’s not just Trump’s inability to control himself, but also his lack of “decency, politeness, self-restraint, commitment, honesty, cooperativeness and the ability to think of others’ well-being,” Goldberg wrote, that has brought us to this tipping point.

Trump’s supporters aren’t helping either because they are enabling him and modeling their own behavior after his own.

“Weirdly, it’s gotten to the point that when I say President Trump is not a man of good character, I feel like I should preface it with a trigger warning for many of my fellow conservatives,” he observed. “What’s most worrisome is that these defenders are redefining good character in Trump’s image, and they end up modeling it.”

Indeed, Trump’s evangelical supporters are by far the worst offenders. They have repeatedly excused his un-Christian behavior to the point where they actually defend his multiple extramarital affairs and efforts to cover them up. And that’s just the tip of the iceberg because Trump’s behavior has revealed evangelicals as hypocrites who clearly don’t care about what the Bible says as long as they have power.

“Still others assume that I am referencing the president’s style, specifically his insults and Twitter addiction,” Goldberg continued. “They overlook that his insults are not merely an act, but rather the product of astonishing levels of narcissism, insecurity and intellectual incuriosity. His Twitter feed is simply a window into his id.”

Goldberg then points out that Trump doesn’t even have the courage to fire his own staffers and that when confronted he shrinks.

“The president who became a celebrity by telling reality-show contestants “you’re fired” has not fired any of his Cabinet officials face-to-face, or even on the phone,” he wrote. “He relies on others, or on Twitter, to deliver the news. He loves controversy because it keeps him in the center ring, but he hates confrontation.”

The best example of this shrinking from confrontation is his failed meeting with Senator Chuck Schumer (D-N.Y.) and Rep. Nancy Pelosi (D-Calif.) inside the Oval Office, a confrontation he insisted play out in front of cameras. Trump thought he would be able to bully the pair of Democratic leaders, but instead got outplayed by two seasoned politicians to the point where he actually took complete credit and blame for a government shutdown and made a fool of himself for all to see as his arrogance and narcissism backfired spectacularly.

“The driving force behind nearly all of the controversies that have bedeviled his administration is his personality, not his ideology,” Goldberg wrote before concluding.

But his refusal to listen to advisors; his inability to bite his tongue; his demonization and belittling of senators who vote for his agenda; his rants against the 1st Amendment; his praise for dictators and insults for allies; his need to create new controversies to eclipse old ones; and his inexhaustible capacity to lie and fabricate history. All this springs from his nature.

And his nature will be his ultimate undoing as Trump continues to be his own worst enemy.