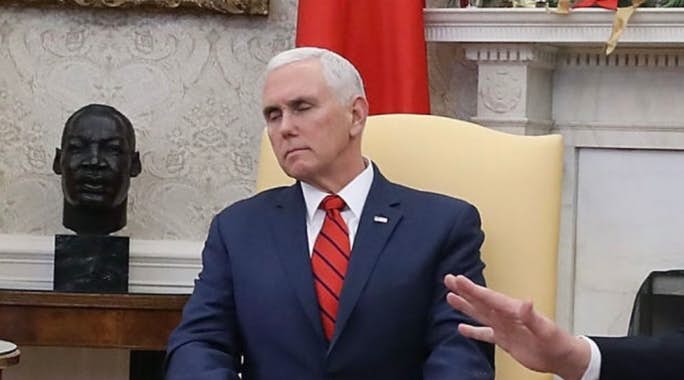 In the wake of Vice President Mike Pence approving of the terrible treatment of migrants in the camps, Twitter users started a trend known as #ThingsJesusNeverSaid in order to call out the hypocrisy of evangelicals.

Pence took a tour of a facility and it backfired on him because the conditions were absolutely inhumane, yet he endorsed them anyway and pretended that everything is normal.

He has been receiving backlash ever since, but people on social media took the criticism even further by calling out evangelicals’ hypocrisy for ignoring Jesus’ teachings in favor of drooling over President Donald Trump.

Here are some of the best:

Fuck refugees, if they don’t want to be treated cruelly then don’t come, I blame the parents #ThingsJesusNeverSaid

“I’ve known Jeffrey Epstein for 15 years. Terrific guy. He’s a lot of fun to be with. It is even said that he likes beautiful women as much as I do, and many of them are on the younger side.”#ThingsJesusNeverSaid

Red and yellow, black and white
They’re all precious in my sight
With the exceeption of the ones
Who weren’t born here.

Thou shalt procure a hot pool boy to frolic naked with you & the wife.

Thou shalt use me to make riches to withhold from the poor.

Thou shalt pimp an adulterer who preys on women/children and bears false witness with regularity Satan would find exhausting. #ThingsJesusNeverSaid pic.twitter.com/5Pz8jJLawJ

“Whoever yells that they’re a Christian loudest while committing a sin is obviously the best Christian.”#ThingsJesusNeverSaid

“I moved on her like a bitch…and she was married”

“I did try and f*ck her. She was married”

“Just kiss. I don’t even wait. And when you’re a star, they let you do it. You can do anything”

“Grab them by the pussy. You can do anything”

Evangelicals sold what was left of their souls when they hopped on the Trump bandwagon. They have lost all credibility and deserve every bit of the ridicule they’re receiving. And they should have to live with their shame forever.