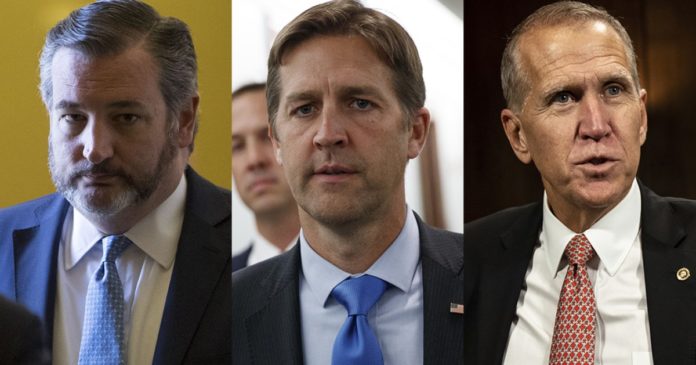 Conservative New York Times columnist Bret Stephens says the 41 GOP senators who voted in lock step with President Donald Trump this week to uphold his national emergency declaration so he can build his wall are “cowards” who have betrayed their own core beliefs.

In his op-ed, Stephens calls the 12 Republican senators who voted to overturn Trump’s emergency decree are “righteous,” but those who didn’t will rue the day they failed to respond to the president:

“Less than a quarter of the G.O.P. caucus was prepared to block a national-emergency declaration most of them know violates the separation of powers, tramples on their legislative prerogatives, makes a mockery of long-held conservative principles, and establishes a political precedent they will come to regret bitterly and soon.”

Stephens singles out by name two Republican senators who initially said they would vote against Trump, Ben Sasse (NE) and Thom Tillis (NC):

“Both of them previously opposed the emergency declaration. Both are up for renomination and re-election next year. And both found ways to vote something other than their consciences.”

The op-ed concludes with Stephens predicting that caving to Trump on the national emergency vote will lead to the downfall of the GOP:

“Now the majority of Republicans in the Senate have surrendered to the idea that a president can spend taxpayer money from a partisan whim in express defiance of Congress. It’s one more capitulation to Trumpism in a list that now includes the abandoned beliefs that international alliances make us safer, free trade makes us richer, immigration makes us stronger, a free press makes us freer, human rights make us better, and tyrants should be confronted, not coddled. The Republican Party is burying the legacy of Ronald Reagan in ways Elizabeth Warren and Bernie Sanders could only dream of.”