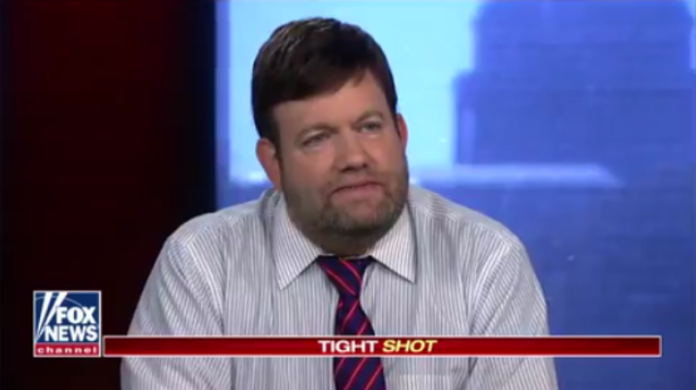 The damage President Donald Trump has wreaked upon the nation is now causing even Frank Luntz to question whether he still wants to be a Republican.

For years, the conservative pollster has been considered a “partisan warrior” for the right-wing.

As such, Luntz spent decades urging Republicans to demonize Democrats and policies conservatives hate by using words such as “corrupt” and “traitors,” even going so far as to cite Newt Gingrich as someone Republicans should emulate.

That makes Luntz one of the chief architects of the current atmosphere of divisiveness and extreme partisanship that exists today, and a big reason why Trump is president.

Well, now that Luntz is seeing the damage his brand of politics has caused, he is apparently beginning to regret his role in it, and doesn’t even know if he wants to be a Republican anymore.

During an interview on Fox News with Howard Kurtz, Luntz clearly struggled with his past tactics.

“We can’t live this way anymore,” Luntz said while talking about the anger and divisiveness displayed during the 2018 midterm election.

Luntz vowed to travel to every state to bring voters together on common ground, which is something he should have been doing in the first place instead of urging Republicans to accuse Democrats of treason and using negative words to slander good policies.

“Do you regret any of the tactics of your past, and are you now moving to a different place when you talk about ‘I want to spend 2019 finding common ground’?” Kurtz asked. “That’s not Frank Luntz the partisan warrior.”

“It’s hard to be a partisan warrior when you see the damage that’s done,” Luntz replied, ignoring the fact that he is somewhat responsible for the polarization in our politics and media.

“Do you still consider yourself a Republican?” Kurtz asked.

The partisan political consultant could not bring himself to directly blame Trump as the reason for the newfound questioning of his political identity, only attacking the “tone and demeanor” of both parties, unlike ex-GOP strategist Steve Schmidt, who quit the Republican Party because of Trump.

Again, Luntz is a hypocrite because he’s the one who advised Republicans to be more like Newt Gingrich, to poison political discourse in order to get their way. And now he claims to be horrified by the damage he’s done, but won’t admit that he is partly responsible and doesn’t even have the spine to hold Trump accountable for making things worse.

“It sounds like you are becoming an independent without using those words,” Kurtz said.

Frankly, it’s more like Luntz is a coward who is frightened of being judged by history for what he has done to this country.

.@FrankLuntz tells me people are confused by blurring of news & opinion, and when asked if he’s still a Republican: “I don’t know.” #Mediabuzz https://t.co/lKfyfEsaeF