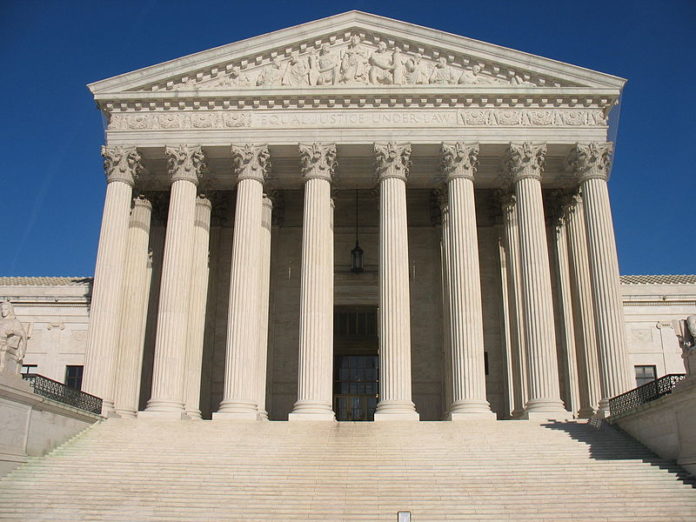 President Donald Trump declared on Wednesday morning that he would challenge impeachment in the Supreme Court, causing constitutional law experts to laugh at him.

As more and more Democrats and prominent conservatives call for impeachment, Trump lashed out by threatening to appeal any such effort to the Supreme Court.

The Mueller Report, despite being written by Angry Democrats and Trump Haters, and with unlimited money behind it ($35,000,000), didn’t lay a glove on me. I DID NOTHING WRONG. If the partisan Dems ever tried to Impeach, I would first head to the U.S. Supreme Court. Not only……

…..are there no “High Crimes and Misdemeanors,” there are no Crimes by me at all. All of the Crimes were committed by Crooked Hillary, the Dems, the DNC and Dirty Cops – and we caught them in the act! We waited for Mueller and WON, so now the Dems look to Congress as last hope!

The problem is that the Constitution clearly says that the House of Representatives has the sole power to impeach while the Senate is responsible for holding the impeachment trial and carrying out a vote on whether or not the president is guilty and should be ousted from office. The only involvement from the Supreme Court is that the Chief Justice presides over the trial. The high court itself cannot do anything to block an impeachment.

In response to Trump’s ignorance of the Constitution and the powers of the three branches, constitutional law experts schooled him.

Yeah, so that’s *not* how impeachment works.

“The House … shall have the sole Power of Impeachment.”

“The Senate shall have the sole Power to try all Impeachments.”

As @tribelaw & I explain in our book, the Framers debated giving #SCOTUS this power & expressly decided not to https://t.co/amW6Ru8kiQ

Harvard Law professor Laurence Tribe slammed Trump’s “idiocy” and accused him of believing he has stacked the high court in his favor enough to get away with anything.

Trump’s idiocy won’t serve him well as we move through the #impeachment process. Not even a SCOTUS filled with Trump appointees would get in the way of the House or Senate, where CJ Roberts would preside over Trump’s Impeachment Trial. My book with @JoshuaMatz8 lays it all out. https://t.co/eXTCX2wFnZ

Trump thinks that — having stolen one SCt seat for Gorsuch and installed as a second justice one Kavanaugh whose confirmation hearing should’ve disqualified him — he now has a “get out of jail free” card and a “stay in power forever” card in the Marble Palace. No way, Donald. https://t.co/7U6ifhcbTl

Even Neal Katyal informed Trump that his threat is ridiculous and directly quoted the Constitution.

Good luck w that. Here is article Article 1, Section 2, Clause 5 of our Constitution (you know, the thing you are supposed to take care to faithfully execute):

The House of Representatives shall chuse their Speaker and other Officers; and shall have the SOLE Power of Impeachment https://t.co/TCzIVOmiNW

Matz and Tribe further countered Trump by posting an excerpt from their book on their blog about impeachment and the Supreme Court.

One of the most significant objections to trying impeachments before the Supreme Court was that the president might have appointed one or more of the justices. George Mason and Roger Sherman both raised this concern. At bottom, they worried about independence: the entity charged with trying the president should not be populated by his appointees and thereby subject to his influence. In that circumstance, an appearance (and reality) of bias could undermine the whole process—especially if the president had nominated allies who shared his corrupt or abusive views.

And with so few members on the court, it would be much easier to sway them to rule in the president’s favor. So, the founding fathers left the role of impeachment to Congress.

“With the Supreme Court disqualified, this left only one viable option in the federal government: the Senate,” the professors wrote.

The only thing Trump achieved with his tweet is demonstrate that he still has zero clue what the Constitution says and he believes he’s a dictator who can get away with breaking the law simply by stacking the courts in his favor. Unless the Supreme Court is prepared to spark a constitutional crisis by sticking its nose where it clearly doesn’t belong, the justices will laugh in Trump’s face if he dares try to get them involved.