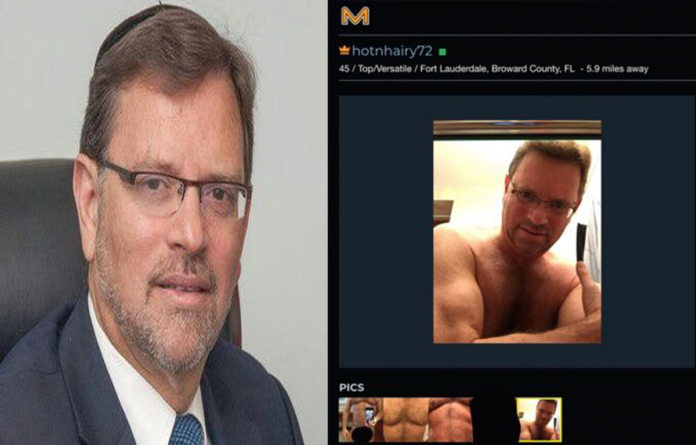 A star in the conversion therapy movement has been busted looking for hookups on gay dating Apps, Manhunt and Gay Bear Nation. Truth Wins Out brought the truth out about Norman Goldwasser, and “Ex-Gay” therapist who has claimed to have successfully converted people’s sexual orientation for decades.

In 2010, Goldwasser posted a blog on a Christians Conservative website called Free Republic in which he stated:

“The real truth is that there is a plethora of solid clinical research and experience that strongly supports the real facts—that orientation, in many, if not most cases, is modifiable, and indeed changeable, given the right motivation, treatment plan, and therapeutic technologies that are currently available,” Goldwasser wrote.

At Horizon Psychological Services in Miami Beach, the Orthodox Jewish “trauma focused” licensed psychologist has compared being gay to Obsessive Compulsive Disorder. He has given talks in Israel in which he conflated homosexuality and sexual abuse. Yet this same guy took to Manhunt under the profile name of “Hotnhairy72,” posting nude pictures of himself and asking for gay hookups. Then one of his former patients spotted him and contacted Truth Wins Out.

Truth Wins Out is a nonprofit think tank and advocacy organization that fights against right-wing extremism and anti-LGBT prejudice and discrimination. They conducted an undercover catfishing expedition, contacting Goldwasser who offered to meet with the catfish they called “Brandon” at a motel room in Fort Lauderdale.

However, before Goldwasser could meet with “Brandon,” who was actually the founder of Truth Wins Out, Wayne Besen, he learned the truth. Then Besen confronted him about why he was peddling a fake conversion therapy program by day and actively searching for “hairy guys only!” for oral sex on nights and weekends.

According to Besen, Goldwasser tried to deny the profile was his until he texted him the screenshots.

“He then called me and confessed, begging for mercy.”

NBC News confirmed that the phone number Besen said he used to communicate with Goldwasser led straight to his work at Horizon Psychological Services. He responded to NBC with an email and didn’t respond to follow-up questions.

“The fact that this story and others have been brought to the public is incredibly painful but will become a catalyst for me seeking the right help for myself,” Goldwasser stated in an email.

“It is sad that despite the fact that I have been able to help many people over the years who have suffered from the effects of child sexual abuse and sexual addiction, I obviously was unable to help myself. There is no justification for my personal behavior and I deeply regret the pain I have caused people in my personal life.”

Truth Wins Out stated that they don’t out people in ex-gay programs unless they meet three criteria:

As the new movie, Boy Erased, brings renewed attention to the damage caused by “ex-gay” programs, we see once more how much hypocrisy is central to the fraudulent and dangerous practices.

.@TroyeSivan explains what he hopes people will take away from #BoyErased, his new movie that exposes the truth of gay conversion therapy: pic.twitter.com/b2uKXVug1G

The Human Rights Campaign asserts that gay conversion therapy has been:
“rejected by every mainstream medical and mental health organization for decades, but due to continuing discrimination and societal bias against LGBTQ people, some practitioners continue to conduct conversion therapy. Minors are especially vulnerable, and conversion therapy can lead to depression, anxiety, drug use, homelessness, and suicide.”

“A story that demands to be told.” – Splash Report