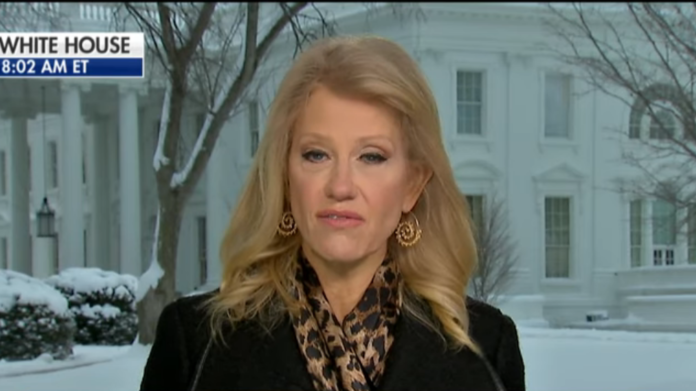 Appearing on “Fox & Friends” Monday morning, Conway was asked about the Times report which broke on Friday evening. She responded:

“The president said this weekend that it’s the most insulting thing that he’s ever been asked. Which is saying a great deal, given everything that’s been said and done about him.”

Conway also asserted that “rogue actors” at the FBI are to blame for the entire Russia investigation:

“It sort of confirms what the president has said all along at some of the rogue actors at the tippy-top of the FBI who are no longer there because they were fired and worse. Some of them were deemed to be leaking and lying, sexting each other obviously with their tremendous biases against this president, so I think it confirms what he said all along about some of those rogue actors.”

Shortly after Conway’s comments on Fox, Trump himself was asked about his connections to Russia on the South Lawn of the White House. He told reporters:

“I never worked for Russia!”

“I never worked for Russia,” ⁦@realDonaldTrump⁩ says and calls the question disgraceful. pic.twitter.com/ZDvSJwXIlZ

The president also attacked the press via Twitter Monday morning, suggesting that they take a two-week break from the Russia story:

The Fake News gets crazier and more dishonest every single day. Amazing to watch as certain people covering me, and the tremendous success of this administration, have truly gone MAD! Their Fake reporting creates anger and disunity. Take two weeks off and come back rested. Chill!

But despite his anger and denials, the facts would seem to suggest that Trump does indeed have endless connections to Russia, and a report from The Moscow Project details 101 contacts between the 2016 Trump campaign and Russian officials. Hopefully the Democratic-controlled House can get to the bottom of some of these lingering questions.