The United States Blues
Home National News Conway: Trump Has Changed His Mind — Doesn’t Want To ‘Own’ The... 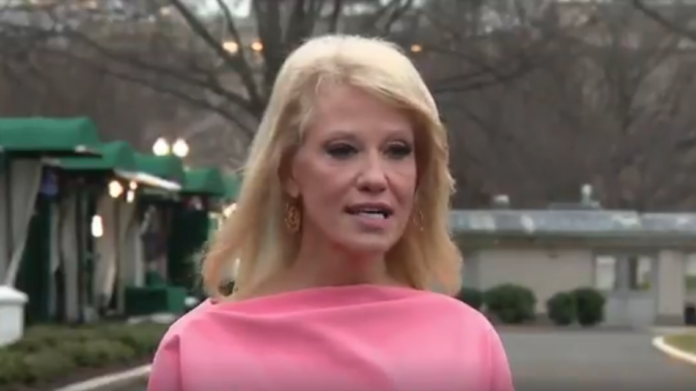 In the latest instance of President Donald Trump doing a gigantic flip-flop on an issue, White House counselor Kellyanne Conway wants us to know that the president no longer wants to “own” the government shutdown because Congressional Democrats were “rude” when they met with him on Wednesday.

“You can say ‘wall’ all you want, you can make it a four letter word. Nancy Pelosi yesterday just ingored and interrupted and was, frankly, just rude and dismissive [during a meeting with the president.]”

Conway then noted that Trump would be meeting again Friday with Congressional leaders:

“So that was really poor form. But the president has graciously invited them back here tomorrow. And hopefully they will come recognizing that border security is not a partisan issue.”

On December 11, Trump told incoming House Speaker Nancy Pelosi (D-CA) and Senate Minority Leader Chuck Schumer (D-NY) that he was “proud” to shut down the federal government until he got at least $5 billion for his long-promised wall on the Southern border:

“If we don’t get what we want … I am proud to shut down the government for border security.”

Now, however, with polls showing the public blames Trump for the continuing shuttering of the government by a two-to-one margin, the White House is trying to suggest that because Pelosi refused to be sufficiently reverential to the president, he no longer owns the very shutdown he instigated. How convenient.

Twitter lit up with scorn for Conway and her boss after she declared Trump is refusing to take responsibility for nearly 800,000 federal workers not receiving paychecks they’ve earned:

@KellyannePolls is hilarious – can not believe she could keep a straight face while complaining about folks in #DC being rude. her boss & his lackeys, her included, have completely erased civility from our national discourse.#trumpcrimefamily #ticktock@HouseDemocrats #Welcome

What about y’alls reaction to the global warming reporter. #fuckyouralternativefacts pic.twitter.com/CAlPe2g0PL

The Trump administration complaining about others being “rude” and “ignoring facts” is probably the weirdest shit that has happened this year. But hey, the year is young.#TrumpShutdown

For anyone in the Trump administration to complain about a lack of civility on Washington is not only a hypocritical absurdity, it also suggest that they’re in for a rough couple of years, provided Trump isn’t removed from office before 2020.