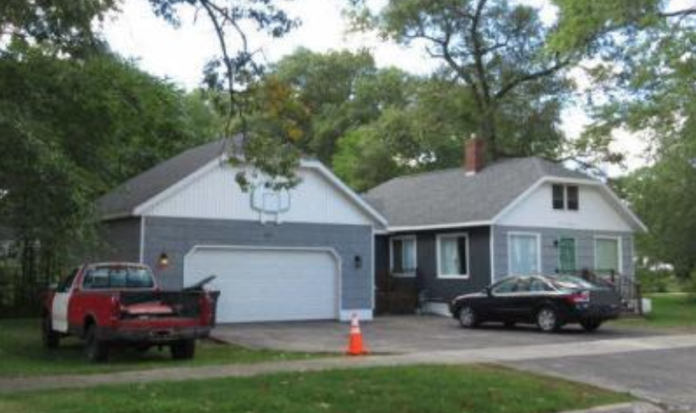 A Michigan police officer accidentally outed himself as a member of the KKK this week by neglecting to hide his racist memorabilia before trying to sell his house.

Detroit native and U.S. Army vet Rob Mathis and his wife have been house shopping like any normal couple. So, when they came upon a house in Muskegon that was on the market, they set up a showing with the realtor and took a tour that soon became a nightmare.

“My wife and I have been house shopping for a little over a month now; searching houses in Sterling Heights, GrandRapids, Hudsonville, and Muskegon,” he wrote on Facebook. “Today we were looking at a house in Holton that we both agreed would be perfect, so we meet our realtor to see the house it’s beautiful.”

The home belongs to veteran Muskegon police officer Charles Anderson, and one would think the home of a cop would be an easy house to sell. But not this house.

Upon entering the home, Mathis and his wife realized that not all is what it seemed from the outside.

“As we are walking to the house I’m seeing confederate flags on the walls the dining room table and even the garage,” he wrote. “I’m thinking to myself as a joke I’m walking to the imperial Wizard of the Ku Klux Klan‘s house right now. So to my surprise as I walk into the bedroom there’s an application for the Ku Klux Klan in a frame on the wall and this home is an officer of the Muskegon Police Department.”

Needless to say, Mathis halted the tour and scratched the house from consideration.

“I immediately stopped my walk-through and informed the realtor that I am not writing an offer on this home and I am leaving now,” he wrote. “I feel sick to my stomach knowing that I walk to the home of one of the most racist people in Muskegon hiding behind his uniform and possibly harassing people of color and different nationalities. I’ve thought about this for a few hours now and I thought I would just share with you a picture of the application on the wall. To the officer, I know who you are and I will be looking at resources to expose your prejudice. As for now pictures speak 1000 words.”

Sure enough, Mathis provided a photo of the KKK application hanging on the wall.

According to the New York Post, Muskegon city hall officials were not happy to hear that one of their longest serving officers has a racist history that may have affected how he handled minorities. They have since put him on leave and are surely looking through his cases to see if he did his job fairly.

It’s scary to think that there are police officers who secretly belong to racist right-wing extremist groups like the KKK. But the FBI has been warning for years that KKK members are infiltrating police departments across the country. And it makes one wonder how such officers will do their job when one of their own, like the white nationalist terrorist in El Paso, commits a mass shooting. Will they try to stop the shooter, or sit back and watch the carnage as if it’s entertainment?